I’ve been writing about a looming cobalt supply crunch that I refer to as the “Cobalt Cliff” since March 2016 when I learned that the overwhelming bulk of the world’s cobalt is a byproduct of copper mining in the Congo (72%) and nickel mining in other countries (26%). Last Thursday, I delivered a presentation on sub-sea mining and supply and demand issues in the cobalt market at the 19th Annual Advanced Automotive Battery Conference in San Diego. This article will summarize the supply and demand aspects of my presentation, describe the insurmountable cobalt supply deficits every non-Chinese battery and EV manufacturer will encounter in the front half of the next decade, and explain how the Cobalt Cliff could eradicate non-Chinese EV manufacturing before 2030.

For the last 20 years, lithium-ion battery manufacturers have been incidental beneficiaries of rapid growth in global cobalt supplies as several massive copper mines in the Congo came online. The cobalt byproduct contained in Congolese copper ores was 7,000 tonnes in 1999 and 98,000 tonnes in 2018. In 2018, the Congo was the world's leading producer of cobalt with a 72% market share that will climb to 78% over the next three years. Without sustained demand growth from the battery industry, supply growth of that magnitude would have crushed cobalt prices because industrial demand is extremely inelastic.

As you consider the three classes of cobalt users, I think it’s worthwhile to reflect on their ability to compete for limited cobalt supplies when the inevitable shortages occur.

I’m convinced industrial users will be the most effective competitors because cobalt represents an insignificant percentage of the ultimate cost of cobalt-dependent products and historical data shows that industrial demand does not decline when prices increase. The graph on the left is based on data from Darton Commodities Ltd. and summarizes industrial cobalt demand over the last five years. The price chart on the right is from InfoMine.com and reflects LME cobalt prices during that period. The graphs won’t overlay perfectly due to time scale differences, but a side-by-side comparison says it all. Industrial users will pay what they have to pay to get all the cobalt they need.

I believe manufacturers of batteries for electronics and portable applications also will be relatively effective competitors because battery costs represent a small fraction of the final product cost. Apple (AAPL) wouldn’t be happy if the price of lithium-ion batteries doubled or even tripled, but it could absorb large cost increases without impacting its business model, especially if other electronics manufacturers were in the same boat.

Since every penny matters when you need 60,000 to 100,000 watt-hours of batteries for an EV or millions of watt-hours for a grid-based battery system, I believe manufacturers of batteries for transportation and stationary applications, where batteries represent a huge percentage of total product cost, will be highly ineffective competitors.

Over the next 12 years, Bloomberg New Energy Finance predicts that demand for refined cobalt will ramp from 111,000 tonnes to 327,000 tonnes. Increasing production of a primary metal by almost 200% in 12 years would require a Herculean effort. Increasing production of a byproduct metal by nearly 200% in 12 years is practically impossible when greenfield mine development takes 30 years and expansion projects at existing mines take 10 to 15 years.

Let that number marinate for a minute. The weakest competitors in the cobalt market want to increase their consumption from 13,500 to 184,500 tonnes in 12 years, and they want the incremental cobalt to be dirt cheap. If you listen carefully, you can almost hear the miners laughing.

By this point, you’re undoubtedly wondering, “Why did the LME price for cobalt collapse over the last 15 months?” The simple answer is that:

According to Darton, the cobalt content of Congolese copper ores was 69,000 tonnes in 2015 and 98,300 tonnes in 2018. The three primary sources of that supply growth were:

Since artisanal surface mining is the epicenter of the child labor and human rights abuses that have drawn global attention to cobalt mining in the Congo, one third of the supply growth that eased shortages and crushed prices was the worst possible kind of growth. Additional pressure arose as Chinese banks tightened lending requirements and several battery chemical producers were forced to dump inventories through the LME. 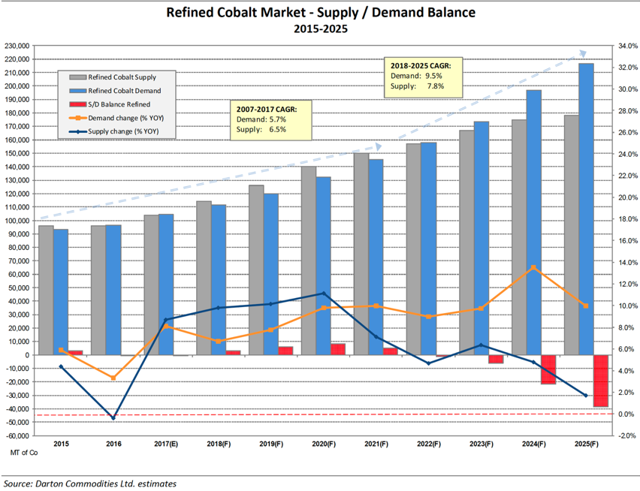 Since greenfield mines take up to 30 years and significant mine expansions take 10 to 15 years, Darton thinks the likelihood that other exploration projects will produce substantial volumes of cobalt in the next decade is remote. 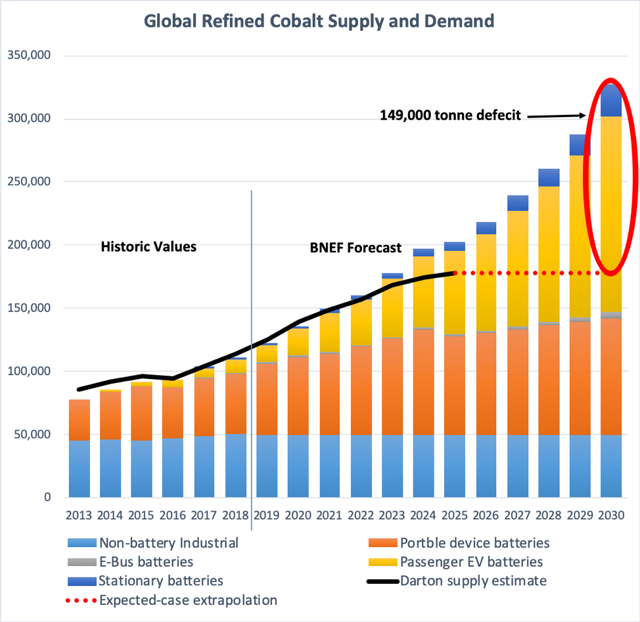 The graph highlights the fundamental nature of the Cobalt Cliff. Cobalt supply growth from identifiable mining projects will flatline as demand growth from automotive and stationary batteries begins to hit its stride. In the expected-case scenario, the deficit progression is:

If Bloomberg’s demand forecasts are even close to accurate, battery manufacturers who make products for transportation and stationary applications will face crippling cobalt shortages that will drive a stake through the heart of global EV sales growth in 2023.

While there’s been lots of happy talk about the potential of laterite deposits to boost nickel and cobalt supplies, laterites are costly to mine and process into refined commercial grade metals. Since iron can cause a host of problems in lithium-ion batteries, the cost of further purifying commercial-grade nickel and cobalt with up to 200 PPM of iron into battery-grade chemicals with less than 10 PPM of iron may prove to be prohibitive.

There’s also been lots of happy talk about reduced cobalt cathode formulations like NMC 811, which is being launched in the Chinese market this year. The first issue with the happy talk is that Bloomberg’s demand estimates incorporate aggressive assumptions about the uptake rates for low cobalt chemistries. The second issue is that most automakers have locked in their vehicle designs and production plans for the next five years. The third issue is that most automakers conduct several years of testing and validation before deciding to use a new battery chemistry. If everything progresses smoothly on a fast track, the world’s automakers won’t be building cars with reduced cobalt batteries until the back half of the next decade. The only possible exception to the general rule is Tesla (TSLA), which frequently marches to the beat of a different drum.

As long as there are surpluses in the global cobalt market, Chinese companies will be eager exporters of battery chemicals. When supplies begin to tighten in 2022, long-standing “China First” policies will kick in to restrict the export of battery chemicals that are needed by local enterprises. That means the entire burden of shortages will fall on non-Chinese companies. This is a classic Force Majeure event where government action will preclude contract performance.

The Cobalt Cliff will be a massive problem because supply growth from visible cobalt mining projects will flatline as demand growth from automotive and stationary batteries begins to hit its stride.

Industrial cobalt users will almost certainly be the strongest competitors in a bidding war for limited cobalt supplies while non-Chinese battery manufacturers will have to make do with the small amount of non-Chinese cobalt that isn’t used for industrial applications.

Substantially all non-Chinese refined cobalt that isn’t used for industrial applications will be used by companies that make batteries for electronics and portable applications.

All non-Chinese companies that make batteries for transportation and stationary applications will be dependent on cobalt refined in China, and as cobalt shortages become crippling, China First policies will restrict exports of cobalt-based battery chemicals.

At some point in the back half of the next decade, there won’t be a reliable cobalt supply chain for any non-Chinese company that makes batteries for transportation and stationary applications.

At that point, the non-Chinese EV and stationary energy storage manufacturers will be forced to shutter their plants due to an inability to obtain enough raw materials to sustain manufacturing activities.

I don’t believe Tesla will survive the Cobalt Cliff unless it manufactures cars in China for sale into non-Chinese markets. I also believe the damage to Volkswagen’s (OTCPK:VLKAF) business will be hard to overcome. Automakers like General Motors (GM), Ford (F), and BMW (OTCPK:BMWYY) will all suffer significant losses as their EV programs are shelved, but Toyota (TM) should weather the storm well because of its focus on hybrid electric vehicles instead of battery electric vehicles.

Disclosure: I am/we are long KATFF, AND SHORT TSLA. I wrote this article myself, and it expresses my own opinions. I am not receiving compensation for it (other than from Seeking Alpha). I have no business relationship with any company whose stock is mentioned in this article.

Additional disclosure: I currently serve as a non-executive director of Giyani Metals Corp (CATPF) and as a member of the index committee for the EQM Battery Metals and Materials Index (BATTIDX). My personal portfolio includes Giyani Metals, Katanga Mining Limited (KATFF) and the Amplify Advanced Battery Metals and Materials ETF (BATT). I’m also short Tesla through long-dated out of the money put options.

360 Comments
To ensure this doesn’t happen in the future, please enable Javascript and cookies in your browser.
Is this happening to you frequently? Please report it on our feedback forum.
If you have an ad-blocker enabled you may be blocked from proceeding. Please disable your ad-blocker and refresh.