Neos Therapeutics, Inc. (NASDAQ:NEOS) is a commercial-stage pharma company that uses a unique delivery mechanism to deliver treatments in the ADHD space. The company has 3 approved products:

With losses mounting and substantial debt repayments ahead of it, NEOS made a strategic decision to shift to more profitable business channels and market segmentation so that it could essentially ditch those channels that weren't making enough for them and double down with sales efforts on the ones that were profitable. The end result in Q2 2019 was prescriptions growth that was near flatline but total revenues increasing 38% due to a higher revenue per pack or, as it were, average selling price for a 30-day supply.

In the latest quarter, sales and marketing expense dropped 37% compared to the prior year's 2nd quarter. The net result was a decline in operating loss from $13.3 million to $2.4 million year on year.

Adzenys XR-ODT was launched in mid 2016 and it is an amphetamine that targets patients, children and adults, above the age of 6. This drug has exclusivity until 2025. Actavis Labs filed with the FDA for a generic version of this drug and NEOS entered into an agreement where Actavis is granted the right to manufacture and sell its generic version in 2025. This particular drug generated $7.2 million in sales for NEOS in Q2 2019.

Cotempla XR-ODT was launched at the end of 2017 and it is a methylphenidate that targets kids ages 6 to 17. This drug has exclusivity until July 2026. Teva (TEVA) was granted the right to manufacture and market its generic version of Cotempla XR-ODT under its ANDA beginning on July 1, 2026. This particular drug generated $6.5 million in sales for NEOS in Q2 2019.

The science behind NEOS's two main drugs is a proprietary modified-release drug delivery platform that enabled the company to create extended release orally disintegrating tablets or ODT and liquid suspension dosage forms of these medications. According to the company's 10-K:

Extended release, or long acting, dosage forms are the standard of care for treating ADHD, making up approximately 54% of ADHD prescriptions. Most of these extended-release dosage forms allow for once-daily dosing in the morning, which eliminates the need to re-dose during the day. However, even with once-daily dosing, there is great potential for improvement. The vast majority of currently available dosage forms for ADHD are tablets and capsules. We believe that the inability, difficulty or reluctance of many patients to swallow intact tablets and capsules contributes to diminished compliance rates. ADHD medications are typically administered in the morning, which is often the busiest and most chaotic period for families.

Some extended-release products do offer alternative dosing options such as opening the capsule to sprinkle contents over food, but the labels on these products typically will include a mention that such manipulation may reduce the efficacy and/or safety of the product.

72.6 million prescriptions were written for ADHD medications in the trailing twelve months ending Q1 2019. In Q2 2019, NEOS had a total of 90,688 total prescriptions for its two ADHD products. Annualized, that is a total of 362,752 prescriptions, or about 0.5% of the total market. See below:

Below is from the October 2019 presentation by NEOS regarding their 3 main products and the total addressable market (with red text by author): 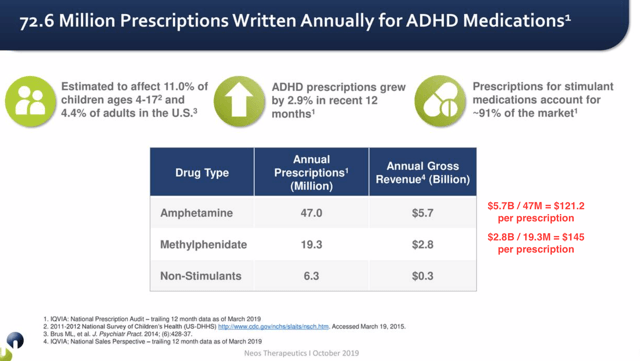 A year ago, NEOS properly identified that it was under-monetizing its products and focused on shedding poorly performing sales channels and doubling down on the ones that were working. Now that they captured the low-hanging fruit, the more difficult task that lies ahead is continued growth in the number of prescriptions while still maintaining discipline on the channels that are working for them. As you can see in the chart below, the company is now generating roughly the market average in price per pack or price per prescription:

(Note: The national averages above are taken from the chart above from the company's October 2019 presentation. It simply takes total gross revenue divided by total prescriptions. NEOS's average price per pack is pretty close to the national average.)

The goal going forward is increasing prescriptions. The company created a program called NEOS RxConnect in January 2019 which is designed to lower co-pays and onboard more pharmacies.

If the company can continue on its path of expense reduction and margin expansion, the bridge loan becomes a big non-starter for investors.

At less than 2 times sales and with margins exploding from 38% to 67% the past 4 quarters, and with the company nearing break-even, NEOS looks like a good speculative turnaround play within the large ADHD space. Utilizing an improved delivery method and with exclusivity for the next 6 years, we think it's worth a gamble here at $1.46 per share.

If the company can continue its path to profitability and grow after reaching that then the stock will likely re-rate higher and they may be able to self-fund future growth plans with its unique delivery method in other areas.

Catalyst Capital
2K Followers
We seek outperformance by focusing on companies with significant near term drivers of value, or catalysts. None of our articles should be construed as investment advice. We are merely trying to find good value.
Follow

Disclosure: I/we have no positions in any stocks mentioned, but may initiate a long position in NEOS over the next 72 hours. I wrote this article myself, and it expresses my own opinions. I am not receiving compensation for it (other than from Seeking Alpha). I have no business relationship with any company whose stock is mentioned in this article.