The news media, bank executives, the U.S. Federal Reserve (the Fed) chairman and even presidential candidates have made remarks about the recent spike in short-term funding rates. What caused the spike, and why is it important?

In mid-September, there was a significant spike in the overnight repurchase agreement (repo) rate. The repo rate reflects the level where lenders (e.g., institutional investors and banks) will extend collateralized cash loans to borrowers (e.g., broker-dealers and other market participants) to meet short-term funding needs. The repo market is like the oil that keeps the financial engine running by supplying liquidity through overnight collateralized loans between market participants.

The spike in rates caught many by surprise, despite warnings by the dealer community over declining bank reserves. The consensus view is that a combination of low bank reserves, corporate tax payments and the settlement of the monthly U.S. Treasury auction caused a temporary shortage of cash in the system, forcing repo rates higher.

Root causes of the repo spike

Banking regulations have created unintended consequences by disincentivizing banks from participating in lending activity that could negatively impact their capital and liquidity ratios. Instead, banks have been incented to passively hold cash rather than engage in repo agreements - which require a market transaction with an outside counterparty and are thus considered riskier from a regulatory perspective. As a result, the size of the overnight general collateral repo market (Treasury and Agency) has declined more than 70% in wake of GFC regulatory reforms, and overnight liquidity has suffered.1

More stringent capital and liquidity requirements have also pressured banks to hold their safest assets (U.S. Treasuries) from a risk-based capital perspective, rather than lend them in the repo market. Some banks have expressed concern that year-end funding pressures are likely to worsen given the current dynamics.

2. Reserve balances were lower than normal

Banking system reserves peaked at $2.8 trillion in August 2014, when the Fed ended its quantitative easing program. Over the past five years, the Fed had attempted to gradually shrink the system's reserves to a more normalized level. 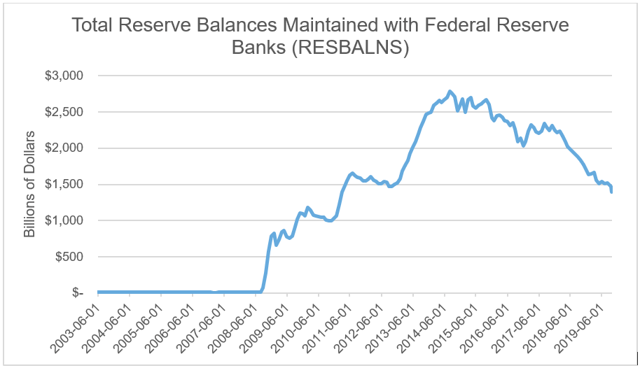 Source: Board of Governors of the Federal Reserve System (U.S.)

The minimum level of reserves that banks must hold for regulatory requirements is estimated to be approximately $1.2-1.3 trillion. Based on data from the Fed, total reserve balances have been edging closer to these levels. This was one factor that led some dealers, over the summer, to predict a potential disruption in the repo market.

Quarterly corporate tax payments (estimated at more than $100 billion) and a significant increase in net Treasury issuance at the monthly auction (over $50 billion of T-Note settlements, offset in part by net T-Bill maturities) were another principal drain on system reserves. A combination of these factors created a cash shortage at a time when the system required more liquidity to meet institutional demand.

4. The repo market disruption is another example of the increasingly common market glitch 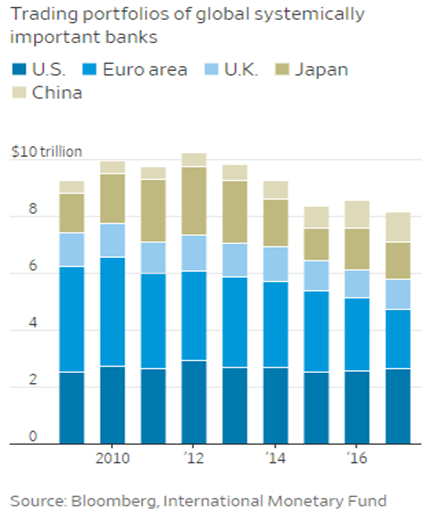 Trading portfolios of systemically important global banks have experienced a significant decline since 2012. As banks pull back from trading, markets have experienced a number of unusual trading events (like flash crashes) as other market participants (hedge funds, algorithmic traders and others) step in to fill the liquidity void.

In the past, banks were better-positioned to act as significant market participants, providing the liquidity necessary to moderate extreme price changes during volatile markets. The current environment has produced a situation where banks are fundamentally stronger but less incentivized to take risk. They now lack the incentives and infrastructure necessary to provide liquidity and support the increased trading activity needed to ensure orderly markets during periods of market stress. The result is that markets are more susceptible to short-term dislocations than in years past.

Several factors converged to cause disruption in the repo market last month. The bottom line is that the system held inadequate reserves, which led to a lack of liquidity in the overnight financing markets. While the Fed is acting to implement longer-term solutions to provide more liquidity on an as-needed basis, its estimation process seems to have misjudged the level of reserves.

The repo event also illustrates structural changes driven by post-GFC regulation that have altered bank incentives. This factor, combined with the actions of market participants who have filled the void left by banks, will likely continue to affect various markets in unpredictable ways. However, while important settlement dates (like tax payments and U.S. Treasury auctions) and capital ratio measurement dates (like year-end and quarter-end) will drain liquidity in the system again going forward, we believe the Fed's shift to a larger balance sheet and its temporary funding operations signifies increased vigilance and its commitment to avoid another major bout of repo funding stress.

These views are subject to change at any time based upon market or other conditions and are current as of the date at the top of the page.

Forecasting represents predictions of market prices and/or volume patterns utilizing varying analytical data. It is not representative of a projection of the stock market, or of any specific investment.

The general information contained in this publication should not be acted upon without obtaining specific legal, tax and investment advice from a licensed professional. The information, analysis and opinions expressed herein are for general information only and are not intended to provide specific advice or recommendations for any individual entity.

Please remember that all investments carry some level of risk. Although steps can be taken to help reduce risk it cannot be completely removed. They do no not typically grow at an even rate of return and may experience negative growth. As with any type of portfolio structuring, attempting to reduce risk and increase return could, at certain times, unintentionally reduce returns.

Investments that are allocated across multiple types of securities may be exposed to a variety of risks based on the asset classes, investment styles, market sectors, and size of companies preferred by the investment managers. Investors should consider how the combined risks impact their total investment portfolio and understand that different risks can lead to varying financial consequences, including loss of principal. Please see a prospectus for further details.

Indexes are unmanaged and cannot be invested in directly.

This material is proprietary and may not be reproduced, transferred, or distributed in any form without prior written permission from Russell Investments. It is delivered on an "as is" basis without warranty.

Comments disabled for this article
To ensure this doesn’t happen in the future, please enable Javascript and cookies in your browser.
Is this happening to you frequently? Please report it on our feedback forum.
If you have an ad-blocker enabled you may be blocked from proceeding. Please disable your ad-blocker and refresh.