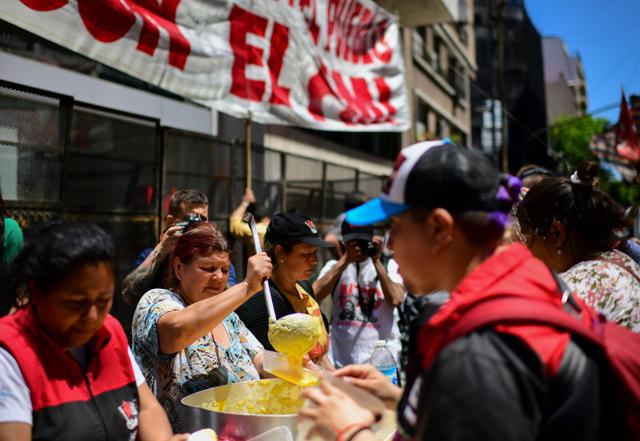 Following the global financial crisis of 2007-08, the International Monetary Fund (IMF) went through a period of self-examination. The old joke that its acronym stood for "It's Mostly Fiscal" bothered some of its leaders, who believed the organization needed to focus less on austerity and more thoroughly consider issues such as inequality, poverty reduction, and gender equality when making loans and other key decisions. There was talk of a "new IMF" that had learned from its old mistakes.

Recent events in Argentina and Ecuador have raised the question of whether this talk of change was just that - talk. Both countries agreed to IMF packages in the past 13 months, and Argentina's was the biggest in the organization's history at $57 billion. But Ecuador saw civil unrest that forced one of the package's key conditions, an end to fuel subsidies, rolled back. Argentina collapsed into a currency and debt crisis that cost President Mauricio Macri his bid for re-election. So many are now asking: Did the IMF fall short in its attempt at evolution? Did it fail to learn the right lessons from the past?

To begin answering these questions, one must acknowledge two inevitable challenges faced by the IMF in all country-rescuing operations, including the recent experiences in Argentina and Ecuador. First, there is always a difficulty with attribution of responsibilities. After all, it's governments that implement policy packages, even if these are negotiated with the IMF, and there always remains some degree of discretion for governments in implementation. It is usually hard to distinguish whether programs fail because of design flaws or implementation choices. At the same time, the IMF makes for an easy scapegoat for decisions that would have to be made under any circumstances - and for the fallout when things go wrong.

Second, when the IMF decides to become a lender of last resort for countries in difficult conditions, it automatically takes risks. Countries resort to the IMF for money typically when their economies are already under fragile or very risky conditions, which makes them vulnerable to many factors beyond direct control.

Take the loan to Argentina. A major critique has been its size and the frontloading of disbursements. Since Argentina's debt trajectory is now clearly on an unsustainable path, some have said the sheer amount of payments due to the IMF in coming months will make the post-election scenario even more difficult for President-elect Alberto Fernández.

But the truth is that, at the moment the IMF decided to make the loan, Argentine debt was not on such an unsustainable trajectory. It also seemed that for the loan to make an impact, its total amount would have to be high. The landscape started to erode significantly when a crisis in confidence among Argentine savers led to a run from peso deposits and steep exchange rate depreciation. The market volatility and sell-off of Argentine assets in the last week of April were harbingers. And even though financial markets stabilized in the following months, debt maturities shortened afterwards, and short-term roll-over needs soared, while sovereign spreads remained higher than before.

Then the worst-case scenario from many investors' standpoint came with the results of primary elections in August, which signaled Fernández's almost certain victory. The ensuing spiral of plunging confidence and currency depreciation ended up leading to capital controls and a partial freeze of domestic debt service, combined with an announcement of a debt "reprofiling." Most scenarios for coming months suggest two potential outcomes for Argentina's debt: either a smooth debt reprofiling - which would entail a haircut in real terms, even if nominal yields are maintained - or a more drastic haircut, which would come only through a more disruptive and protracted process of clear-cut default and renegotiation.

When designing the program, could the IMF have considered the possibility of this collapse in confidence and subsequent unwinding of assumptions? If so, what would have been the alternative? Given that the original program seemed feasible, there was not much in the way of lessons from past mistakes - like failing to recognize debt restructuring needs when they are inevitable ­- that could have been applied in the case. The debt trajectory became clearly unsustainable well after the package negotiation when loss of confidence on fiscal and exchange-rate stabilization led to a run from peso deposits, steep exchange rate depreciation, climbing risk premium, and difficulties to roll-over debt.

In any case, one must recognize the difficulties ahead for bondholders if Argentina is to avoid default with the IMF. Not by chance, bondholders seem to be braced for steep losses. Negotiations between Argentina's government and the IMF on what comes next will also be tough. The most likely scenario with the new government seems to be a more accommodative fiscal policy, combined with further falls in the peso, high inflation, prolonged recession, and a large debt write-down.

Now take Ecuador. Since it's a dollarized economy, nominal exchange rates are not there to help adjust and inevitably… "it's mostly fiscal!" It is said that the IMF originally preferred hikes in value-added tax rates to close the fiscal imbalance, whereas ultimately the government's option was for scrapping fossil fuel subsidies, to be accompanied by compensatory social measures. Ultimately, the decision to eliminate the subsidy in such rapid fashion was also the call of President Lenín Moreno's government. That choice sparked the unexpected reaction in the streets and all that followed, including policy backtracking. The resolution of the high public deficit issue remains to be faced, with or without the IMF.

Recent violent mass demonstrations in Chile, after an increase in metro fares, show that there is something more in the air in the region. Even the countries - like Chile, Peru, and Colombia - that have managed better during Latin America's decade-long "hangover" have to some degree faced domestic discontent with political incumbents as a manifestation of popular dissatisfaction with inequality and slower improvement in social indicators. In Chile, President Sebastian Piñera has apologized and pledged a rise in the minimum wage, pension payments, health benefits, and electricity subsidies that "will partly be financed by raising taxes for the wealthiest Chileans." As of today, things still look far from settled. The IMF has nothing to do with this case.

To sum up, I do not believe that the outcome of IMF programs in Argentina and Ecuador can be understood as a lack of learning from past mistakes. My opinion has been reinforced after recently re-reading the two agreements. One major difficulty faced by the IMF or whoever designs macroeconomic adjustment policies in the current Latin American context is the difficulty involved in reading appropriately - and responsibly - a country's political dynamics and how people will react to austerity policies. Even if the IMF could hire Machiavelli as an adviser, its ability to take political tea leaves into account would not improve. As for avoiding risks entirely, that would only happen if the IMF fundamentally changes its mission - and stops lending to troubled countries entirely.

Otaviano Canuto
457 Followers
Otaviano Canuto, based in Washington, D.C area, is a senior fellow at the Policy Center for the New South, professor at George Washington University, principal of the Center for Macroeconomics and Development and a non-resident senior fellow at Brookings Institution. He is a former vice-president and a former executive director at the World Bank, a former executive director at the International Monetary Fund and a former vice-president at the Inter-American Development Bank. He is also a former deputy minister for international affairs at Brazil’s Ministry of Finance and a former professor of economics at University of São Paulo and University of Campinas, Brazil.He has authored and co-edited 8 books and over 160 book chapters and academic articles, and is a frequent contributor to numerous blogs and periodicals.
Follow