After surging more than 90% since last December, Ball Corp. (BLL) is now trading at a near-20% discount to those highs set toward the end of August and early September. Valuation multiples are still well above the sector median, but there are signs that the company's struggle for revenue growth won't last beyond the short to medium term. Looking at historical P/E values, after briefly breaching 32, forward P/E now stands at a more reasonable 26 or so. If internal efforts and macro trends are anything to go by, then Ball Corp. is looking at fairly strong long-term growth that will eventually justify buying at the current price.

First, let's look at the company's revenue growth figures for the quarters after the Rexam acquisition lapped a year in July 2017. 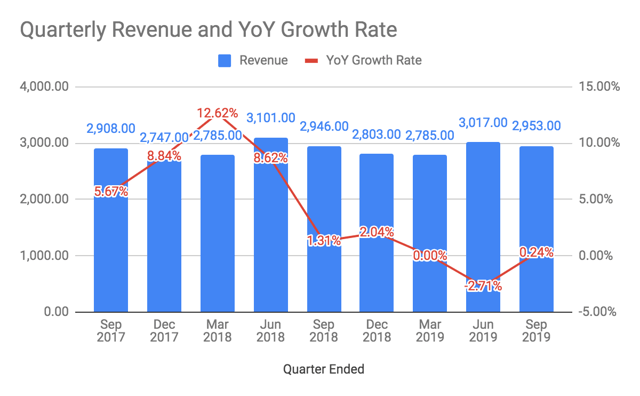 The company, at the Q3 earnings call on October 31, 2019, said that much of its growth for the first three quarters of FY 2019 was impeded by "tight inventory levels, tight capacity conditions and some manufacturing inefficiencies."

BLL is actively addressing this issue by expanding capacity across its core North American market with the intention of increasing its unit output by 5 billion over the next year to eighteen months. Ball Corp. announced a new facility to exclusively manufacture its recently - and successfully - launched "infinitely recyclable" aluminium cup offering. The expected timeline for that is 12-15 months, which means we should see results during Q3 or Q4 2020. In addition, a new beverage can facility has been planned, primarily to help match the additional can-filling capacity of one of its big-ticket clients.

The company has also been busy cutting off the non-starters in its line-up. The two divestitures that were highlighted in the earnings release were the Chinese beverage can business and the Argentinian steel aerosols unit.

Combined, these initiatives should yield positive YoY revenue growth results in the medium to long term. The U.S. alone has an addressable market in excess of 30 billion units, or a third of the global figure of an estimated 93 billion cans a year, which gives BLL ample room to grow despite being the whale in the beverage can ocean.

In terms of volume growth, the company reported an increase in overall sales primarily due to "higher volumes in our beverage packaging segments and increased sales in our aerospace segment." If you look a little closer at BLL's beverage can sales segments, it's clear that the bulk of growth in the most recent quarter came from Europe. One of the drivers of volumes in this market is the consumer shift away from single-serve plastics and toward aluminium beverage cans.

In North and Central America, growth was hampered this quarter by supply constraints impacting inventory levels. The effect of that is expected to continue for the next six quarters - until the Glendale, Arizona, facility goes on-line.

While addressing the capacity issues with new manufacturing facilities in Arizona and possibly another one in the northeastern United States (along with possible expansion in overseas markets), Ball Corp. is also looking at increasing throughput at its current facilities by speeding up and adding new production lines.

The Case for Aluminium Beverage Cans

In the background, there's a clear shift toward aluminium by consumers, forcing beverage makers to stay in lockstep mode and start reducing plastic to very immediate yet necessary time frames.

In 2018, less than 5% of all PET produced was recycled back into food and beverage bottles. According to the United States Environmental Protection Agency, even recycling rates for PET bottles were under 30% as recently as 2017. The real problem, though, is that a lot of the plastic (of every kind produced) goes into landfills. 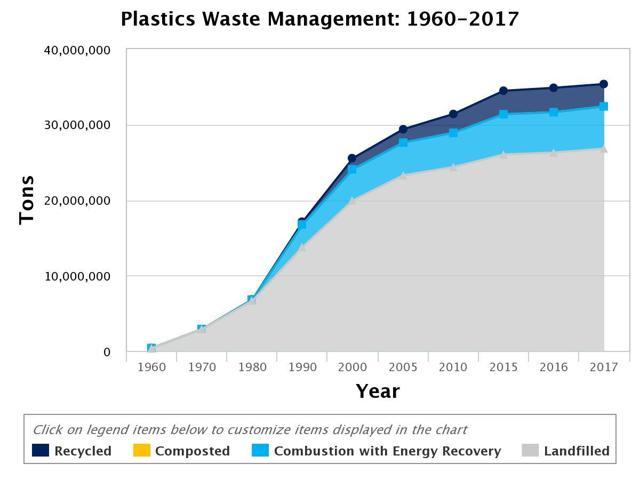 Plastic pollution - specifically, pollution from PET or polyethylene terephthalate products - will increasingly become an inadvertent growth driver for beverage cans. The real opportunity for Ball Corp. is in the domestic market. The current per capita consumption of plastic bottles in the United States (290 bottles per person per annum) is more than double the figure in Europe (140 per person per annum.) Here's another statistical nugget to frighten you:

"In the U.S., the daily plastic waste per person per day is .34 kilograms, about 12 ounces a day. As for litter, the U.S. produces more than 275,000 tons of plastic litter at risk of entering rivers and oceans annually."

To be fair, that includes all kinds of plastics and resins, but it does highlight the problem in a stark way.

By contrast, aluminium has some of the highest recycling rates in the world. Moreover, recycling aluminium "saves more than 90% of the energy required to produce new metal." That's a good thing because it takes "an average of 14,000 kWh of electricity to produce one tonne of aluminium." The second run shaves more than 12,600 kWh off that energy demand per tonne. That's the total battery power of 126 Tesla (TSLA) Model S P100Ds in savings!

When you look at the broader market for beverage packaging, it's clear that aluminium beverage cans have a bright future and a lot of scope for growth.

According to Research Nester, the aluminium can market is expected to continue growing at a CAGR of about 3% through 2027, which translates to a volume increase of about a billion units per year added to the addressable market in the U.S. As the biggest player in the game, Ball Corp. has a distinct global advantage over every other competitor, not to mention a lucrative and healthily aerospace products business to support growth. For now, I'm only looking at the growth potential of its core business.

There's definitely a long-term growth angle here that investors need to look at as far as BLL's core beverage can revenues are concerned. Internal drivers of that growth will be about finding manufacturing efficiencies, completing strategic asset sales, and expanding production capacities across its global footprint, while external tailwinds will include market expansion, consumer trends, and the timing for aluminium beverage packaging to make a major comeback. I'm seeing good things for the newly launched cups, in particular.

The stock's valuation multiples are admittedly high when you look at those of its sector peers, and BLL is even trading at a significant premium to its own 5-year valuation averages.

However, the stock price correction since late August 2019 might not be over yet, which means it could go even lower than the current level of around $65. The struggle with inventory and capacity will eventually be resolved by new additions and faster production lines, but it could eat up market capitalization over the next few quarters. On the bright side, it offers investors a chance to buy a piece of a market leader with a very long growth runway.

Over the next four quarters, keep buying on the dips and keeping your cost basis as low as possible. Dollar-cost averaging your investment over the period might be another good strategy in this case. Either way, the 5-year dividend growth rate of 9% should help offset the premium you'd be paying for the stock at current levels. We should be able to see some upward momentum in the stock price toward the end of FY 2020 or in 1Q 2021. And that's probably the worst-case scenario.

Beulah Meriam K
3.32K Followers
I do deep-dive analyses into the top companies in multiple segments, including retail, consumer goods and technology.
Follow