Sanderson Farms (NASDAQ:SAFM) had an excellent 2019 as its share price will end the year approximately 80% higher than where it started on Jan. 1. An excellent achievement, especially considering the negative impact of the higher corn prices in the final quarter of its financial year, caused by late harvests. 2018 was a weak year, 2019 was slightly better, but Sanderson Farms appears to be quite optimistic for the current financial year and beyond as it expects its EBIT and EBITDA to show a substantial increase.

It was a relatively weak fourth quarter where Sanderson Farms saw the market price for boneless breast meat for food service customers (requiring a big bird) decrease to historically low levels after Labor Day. This means the trend in 2019 was similar to 2018 when Sanderson also had to deal with a weak fourth quarter. Fortunately this was just a temporary issue as poultry prices started to increase again in November and December and Sanderson appears to be relatively optimistic about the start of the current financial year. 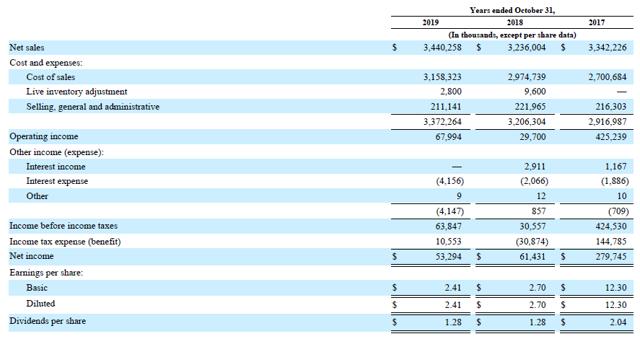 Unfortunately the interest expenses increased, but Sanderson Farms was still able to report a pre-tax profit of almost $64M and a net income of $53.3M or $2.41/share. This means Sanderson Farms is currently trading at approximately 70 times its FY 2019 net income and that obviously is quite expensive, so perhaps the cash flow result provides more reasons to be optimistic about Sanderson Farms at the current valuation. 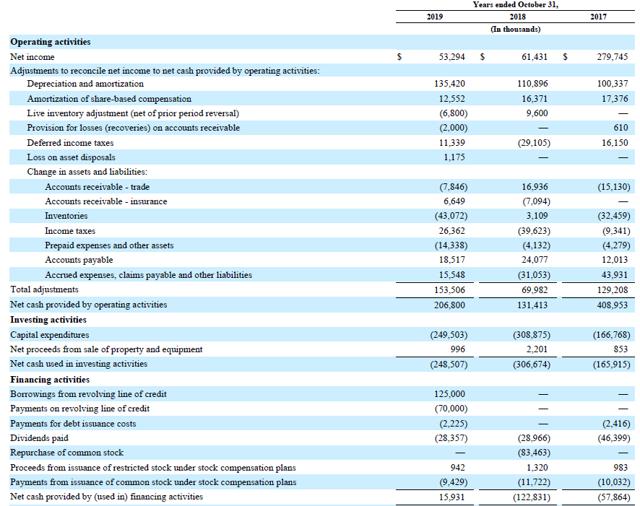 Additionally, the capex in 2019 was still quite high at $250M which means Sanderson Farms was essentially free cash flow negative (again, as the $309M capex in 2018 also prevented Sanderson from posting a positive free cash flow result). However, a large part of the 2019 investments were focusing on growth and the presentation on the Investor Day shows the maintenance capex was just $135M, almost exactly in line with the $133M in annual depreciation expenses. 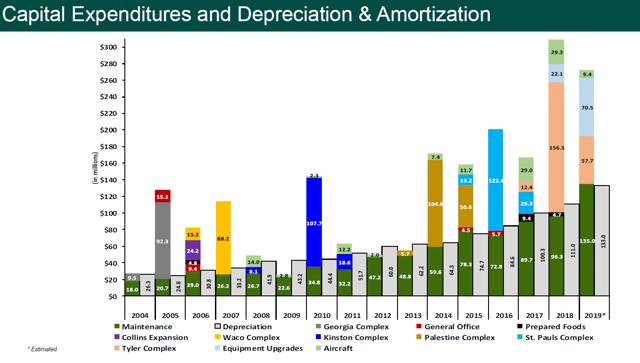 This means that despite the tough year, on a sustaining basis, the free cash flow result was around $70M ($205M in adjusted operating cash flow minus the $135M in maintenance capex). Still not great, but at least Sanderson remained free cash flow positive in a tough year.

While the free cash flow result in 2019 was a bit disappointing, Sanderson Farms is confident in a better performance in 2020. The consensus estimates are pointing in the direction of a $200-250M increase on the EBIT-level, and a similar increase of the EBITDA towards a result of in excess of $450M. These expectations might seem a little bit aggressive but Sanderson Farms’ management team confirmed these assumptions were realistic during the full-year earnings call.

According to Sanderson, approximately $50-80M of the anticipated EBIT increase will be generated through internal efforts while the company also is banking on increased poultry exports to China as the Asian swine flu is still spreading around the world and China is looking at other sources for protein needs. Sanderson expects a combination of internal cost savings and efficiency gains with potentially higher poultry prices and higher production numbers to contribute to a higher EBITDA and EBIT result. Additionally, the new facility in Tyler, Texas, is still running at just 75% of its capacity so it wouldn’t be unfair to expect a higher utilization rate and additional economies of scale at that plant.

But as the share price already has increased to $175, it looks like the market already is pricing in a serious improvement of Sanderson’s financial performance in 2020. But with a net cash position of around $40M, Sanderson’s balance sheet remains quite robust and this obviously also attracts investors.

I could be interested in Sanderson Farms, but only at the right price and I’d like to wait for a pullback or write an out of the money put option as for instance the P150 expiring in May is trading at $3.50-4.10 which is an acceptable option premium while waiting for Sanderson’s share price to reach "buy territory."

The Investment Doctor
16.81K Followers
Author of European Small-Cap Ideas
We zoom in on capital gains and dividend income in European small-caps
As I'm a long-term investor, I'll highlight some stockpicks which will have a 5-7 year investment horizon. As I strongly believe a portfolio should consist of a mixture of dividend-paying stocks and growth stocks, my articles will reflect my thoughts on this mixture.