A popular way to construct investment portfolios is to use a barbell approach, that is, combine higher- and lower-quality assets. This approach has a number of advantages. It provides diversification across the quality spectrum, opportunities for rebalancing and a source of dry powder to spend during drawdowns. Normally, this higher-quality allocation takes the form of government or investment-grade bonds.

In this article, we take a look at whether the few CEFs with significant government bond allocations can play this role in investor portfolios. In particular, we evaluate the following CEFs:

We evaluate the funds on a number of what we call dry powder criteria which are:

Our main takeaway is that these funds fail to tick all the boxes which is the reason why we would tilt to open-end funds to fulfill the role of dry powder assets.

A Look At The CEFs

All three funds are at the very high end of portfolio quality in the CEF space.

MGF holds about 85% in Treasuries, Agencies and other AAA securities with another 13% in investment-grade bonds. It holds about 11% in BBB-rated assets and has low single-digit high-yield holdings. MGF carries no leverage and has a 0.75% total fee on net assets. The fund also has a managed distribution policy of 7.25% of the monthly NAV. MGF closed Wednesday at a 3.5% discount and a 7.5% current yield. 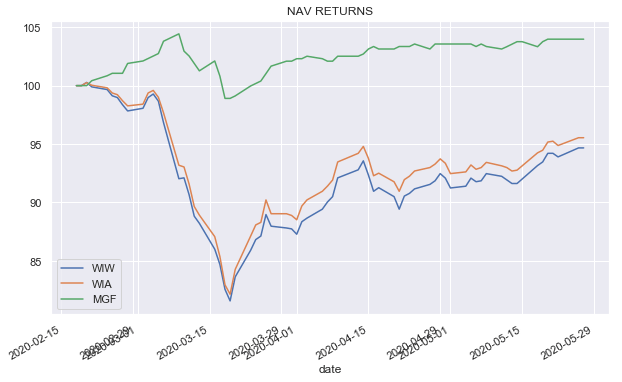 In price terms, the picture is quite a bit worse. MGF dropped about 10% with the Western Asset funds off by 25%. 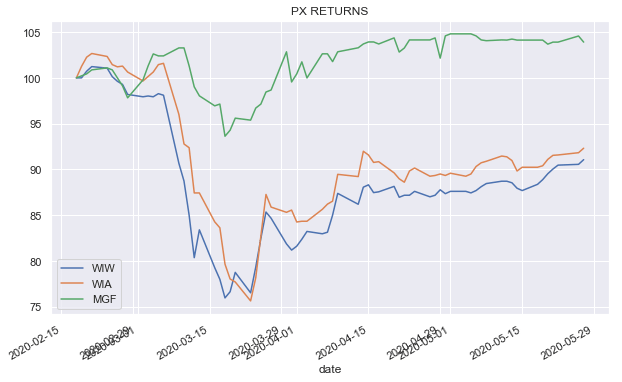 The Western Asset funds don't really pass muster here at all - their NAVs fell sharply and their prices did even worse. Furthermore, these funds remain well off their pre-drawdown levels.

One potential difficulty facing CEFs during drawdown periods is the need to deleverage. Deleveraging is problematic for shareholders because it may lead to both a reduced level of income as well as a locking in losses, particularly in a mean-reverting market. Different CEFs have different probabilities of having to deleverage. Those funds with more volatile assets, higher starting leverage and more strict leverage mandates have a higher chance of deleveraging.

In this regard, MGF looks robust as it carries no leverage. The Western Asset funds, on the other hand, hold around 35% of leverage, all in the form of repos.

It's noteworthy that the Western Asset funds have a 38% strict leverage cap in their prospectus which would force them to shed leverage above that level. At the end of 2019, the funds held around 30% of leverage. A nearly 20% NAV drop through the drawdown would have taken them right up to the 38% cap.

As of March-end, these two funds had slightly more borrowings than they did at the end of the year. It's not clear based on data provided by the funds if they held tight through the drawdown or when they added to their borrowings.

However, it's clear that had the drawdown been extended, the funds would have had to cut their borrowings. Because the funds hold Treasuries, they would not have had to sell lower-quality securities at depressed prices and so would not necessarily have locked in losses. However, selling Treasuries would have lowered the risk profile of the funds had it happened.

In terms of leverage robustness, MGF certainly passes the test. The Western Asset funds, however, do not. During the drawdown, both funds came very close to their 38% leverage caps. And at current 35% leverage level, they are an 8% NAV drop away from having to cut borrowings.

An important consideration for dry powder assets is their effective cost. The cost factor is fairly clear-cut for open-end funds - it's basically the management fee which we can look at in either absolute terms or relative to the underlying yield of the portfolio. For CEFs, the picture is less clear, partly because it can be difficult to gauge the composition of fund fees such as management fee, other fees and leverage costs. And it can also be difficult to gauge the yield of underlying portfolio.

Let's see how MGF manufactures its yield. The picture for MGF is very simple as it uses no leverage and its discount is very small. The fund earns around 2.9% on its assets, takes around 0.7% for itself and passes on the rest to investors with a small yield bump due to the discount. 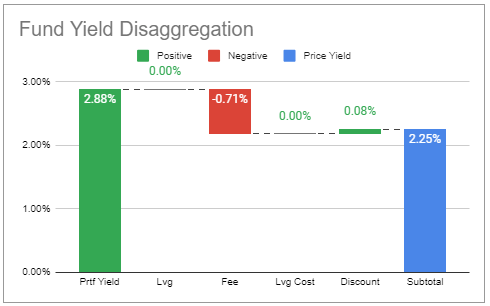 The fund's managed distribution policy muddies the water a bit. Not only does it hide the fact that the fund is earning a fraction of its distribution but it also leads to a tight discount. Although that's nice for current shareholders, it makes the fund very expensive relative to its underlying earning power. It's quite telling that the much more modest distribution rate of the Western Asset funds, despite a similar underlying portfolio yield, is what causes them to trade at double-digit discounts.

As far as the Western Asset funds, the picture looks a bit different because the funds use substantial leverage and boast wide discounts. If we look at WIA, we can see that the fund earns about 2.9% on its underlying portfolio, adds another 0.8% through its use of leverage net of cost, takes away 0.75% via its fee and adds another 0.4% via its wide discount. Net-net, the fund is effectively adding about 0.45% of additional yield on top of its portfolio. In absolute terms, that's not a whole lot, but in relative terms, it's not too bad. 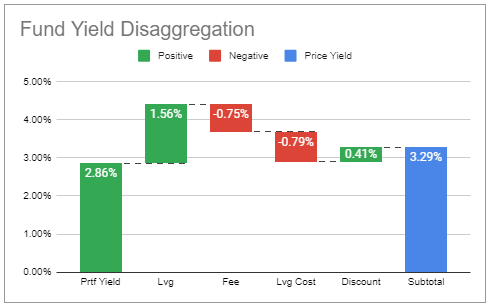 By the effective cost metric, MGF looks pretty expensive to us, effectively charging 0.75% in absolute terms and a quarter of the portfolio yield in relative terms. The Western Asset funds are able to enhance the yield of the underlying portfolio making them much more cost efficient for investors.

All in all, if we summarize the four features of dry powder CEFs, we come up with the following table. MGF does well on the resilience and leverage fronts, is mixed on the strength during the drawdown, and fails on the cost effectiveness point.

The Western Asset funds fail on three of the four metrics and does well on the cost effectiveness point.

All in all, we find these three CEFs difficult to justify as dry powder options in income portfolios. We would instead look to open-end options as alternatives.

A barbell investment approach which mixes both higher-quality and lower-quality assets has a number of benefits. The higher-quality assets provide a source of dry powder and allow for diversification and rebalancing during drawdown periods. To qualify as dry powder assets, CEFs should have four characteristics of strength during drawdowns, resilience post-drawdowns, a robust leverage mechanism and cost effectiveness. As we saw in the article, even higher-quality CEFs can struggle to meet all four of these criteria which is why we would tilt to open-end funds to fill this portfolio need.

Check out Systematic Income and explore the best of the fund, preferred and baby bond markets with our powerful interactive investor tools.

Identify the most attractive CEFs and track the entire market with our evidence-based bespoke metrics. Pick up the best preferred stocks and baby bonds that fit your criteria.

Get investment ideas and sector views from our Strategic Allocation Framework and Income Focus List.