The HUI and the XAU are the world's best known gold mining indexes, and are quoted widely in the financial press.

The Philadelphia Gold and Silver Index, known as the XAU, is a broader index and currently comprises 30 gold mining stocks.

GDX is not an index but an ETF, the VanEck Vectors Gold Miners ETF.

Gold mining stocks while providing an exposure to the gold price, are a different asset class to holding physical gold.

Probably the two best known gold mining stock indexes in the world's financial markets are the HUI and the XAU. HUI is the ticker symbol for the NYSE Arca Gold BUGS Index. XAU is the ticker symbol for the Philadelphia Gold and Silver Index. Both of these monikers make an appearance on many gold related websites and many general financial market websites as well, so its worth knowing briefly what these indexes are and what they represent.

A quick note on terminology: The words indexes and indices are equally correct, it just depends on your preference. Likewise, when talking about gold stocks within indexes, we can interchangeably use the terms gold stocks, gold mining companies, gold miners, equities, securities, index components, index constituents etc.

The HUI was launched on 15 March 1996 by the American Stock Exchange (AMEX), and was originally known as the AMEX Gold BUGS Index. BUGS is an acronym for 'Basket of Unhedged Gold Stocks'. Through a process of various stock exchange mergers and acquisitions over time, the HUI is now known as the NYSE Arca Gold BUGS Index.

Briefly, in 2008, the AMEX was acquired by NYSE Euronext. In 2006, NYSE had acquired the Archipelago (Arca) trading platform. Hence, as a result of these acquisitions and exchange mergers, the NYSE changed the name of the AMEX Gold BUGS Index to the NYSE Arca Gold BUGS Index. An archived imprint of the AMEX website from 1996 can be seen here.

Also note that in 2012, Intercontinental Exchange (ICE) acquired NYSE Euronext, so the NYSE Arca is now owned by ICE and the Gold BUGS Index is now calculated by ICE. The letters in the ticker HUI do not mean anything, i.e. H, U, I is not an acronym or a shortened version of anything. If anyone thinks HUI might signify something of relevance, please add a comment below this article.

According to the official ICE methodology document, the HUI is "designed to measure the performance of companies involved in the mining of gold ore." It specifically only includes stocks of companies that do not hedge their gold production beyond one and a half years. By including only non-hedging gold miners, the index therefore attempts to provide exposure to near term gold price movements.

Another distinguishing characteristics of the HUI Index is that its a modified equal weighted index of gold mining stocks. A modification means that companies in the index are weighted to an extent but not fully. The process works as follows. All eligible stocks are ranked based on their full market capitalization (and not their free float). The top two stocks are each attributed a 15% weight. The third ranked stock is attributed a 10% weight. All remaining stocks from fourth position down are equally weighted into the remaining 60% of the index weight. Generally speaking, the free float is that portion of the outstanding equity that is not held by insiders. 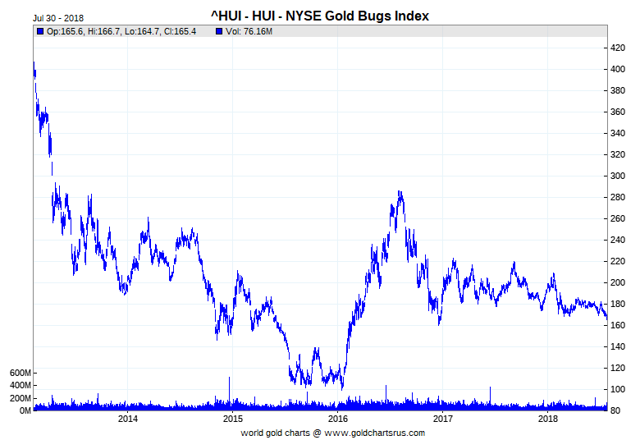 Many websites all over the internet state that the HUI is equally weighted, but this is not correct as they fail to mention the above modification. For those interested in the HUI methodology, you can read the methodology document here.

Gold mining stocks eligible for inclusion in the HUI have to be either listed on the NYSE or the NYSE American or else traded on NASDAQ. NYSE American is a small cap exchange operated by NYSE and was formerly called NYSE MKT, and is inherited from the American Stock Exchange (AMEX). The number of gold mining stocks that can be included in the HUI is variable and the constituents can change quarterly during index rebalances. When launched in March 1996, the HUI had a base level of 200.00.

The HUI currently has 23 constituent securities predominantly companies headquartered in the US, Canada and South Africa, including the large Goldcorp, Newmont Mining and Barrick, and miners such as Eldorado Gold, Kinross Gold, and Tahoe Resources. It also includes the American Depository Receipts (ADRs) of the South African miners, AngloGold Ashanti, Randgold Resources and Sibanye. The HUI also includes the predominantly silver miners Coeur Mining and Hecla Mining. A full list of the 23 components of the HUI can be seen here.

From World Majors to Juniors: GDM and JHUI

The NYSE also operates two other gold mining indices of relevance. These indexes are less well-known than the HUI and are the NYSE Arca Gold Miners Index (GDM), and the NYSE Arca Junior Gold BUGS Index (JHUI).

Unlike the equally weighted HUI, the NYSE Arca Gold Miners Index (GDM) is a market capitalization weighted index that comprises "publicly traded companies primarily involved in the mining of gold and silver in locations around the world." This broader representation of gold and silver mining companies from around the world (instead of just a US listing), and the fact that inclusion is not limited to miners who don't engage in hedging, explains why there are currently 49 components in the GDM, a list of which can be seen here.

Nearly all the WGC members are present in the GDM. There are also a lot of Australian gold mining companies in the GDM, and a couple of Chinese gold mining companies in the index, namely Zhaojin Mining Industry and Zijin Mining Group, but no Russian gold miners (maybe due to political reasons). The number of stocks that can be included in the GDM is also variable and the constituents can also change quarterly during index rebalances. The GDM was launched in October 2004. Anyone interested in the GDM index methodology can read its methodology document here.

The NYSE Arca Junior Gold BUGS Index (JHUI) is a modified equal weighted index of small-cap companies involved in gold mining. With a similar index creation process to the HUI, the JHUI methodology document can be seen here.

The Philadelphia Gold and Silver Index (XAU) is a modified market capitalization weighted index of the stocks of companies active in gold and silver mining industry. The XAU was launched in January 1979 with a base value of 100.00. Like the HUI, the XAU is now part of a bigger exchange group, in this case part of NASDAQ OMX. This follows the merger of NASDAQ and OMX in 2007 and their acquisition of the Philadelphia Stock Exchange, America's oldest exchange, also in 2007. An archived version of the Philadelphia Stock Exchange website which mentions the XAU can be seen here.

To be eligible for inclusion in the XAU, a security of a gold or silver miner has to be listed on either the NYSE or NYSE American exchanges, or else traded on NASDAQ. The company also has to have a market cap of at least US $100 million and meet a certain liquidity threshold of at least 1.5 shares traded in the last 6 months. Importantly, the XAU does not make gold hedging an exclusion criterion, therefore the XAU can include miners that hedge their production. 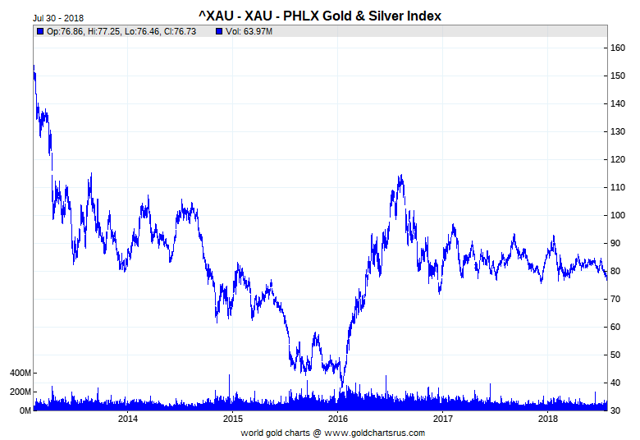 A number of parameters are applied to the XAU to prevent various large cap gold miners dominating the index weights. These parameters include that no stock can have a weight greater than 30% of the index, and that the top 3 stocks by market cap together do not represent more than 60% of the index's weight. The XAU is rebalanced quarterly at which points a company can be ejected or added based on various eligibility criteria. The methodology document of the XAU can be seen here.

There are 30 gold and silver mining stocks in the XAU. A list of component stocks can he seen on the NASDAQ site here and a list with live prices on the Investing.com website here. The XAU contains a lot of the same mining companies as the HUI such as Barrick, Goldcorp, Newmont and Kinross, but some other names besides, such as Pan American Silver, First Majestic Silver, McEwen Mining, and Sandstorm Gold. With 30 stocks in the XAU, it takes in most of the members of the 24 member World Gold Council.

Another gold stock metric that is often seen on precious metals websites is the GDX. This however is not an index but an Exchange Traded Fund (ETF), namely the VanEck Vectors Gold Miners ETF (GDX). The GDX tracks the above mentioned NYSE Arca Gold Miners Index (GDM).

There is also a VanEck Vectors Junior Gold Miners ETF (GDXJ) which tracks not the JHUI but the MVIS Global Junior Gold Miners Index. The below chart shows the performance of the GDX vs the GDXJ. Notably, from January 2010 to September 2017, a time period during which the US dollar gold price fell by 20%, the GDX returned a negative 45%, highlighting the under-performance of gold mining stocks to the gold price during this period. 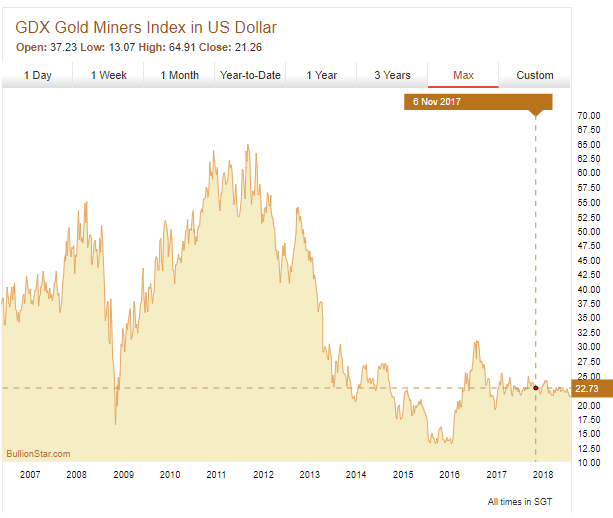 Beyond the HUI and XAU, there are many more gold mining indexes around the world, some of them global in nature, such as the S&P/TSX Global Gold Index and the NASDAQ OMX Global Gold & Precious Metals Index, and some that are exchange specific such as the Johannesburg Stock Exchange (JSE) Gold Mining Index. But the HUI and XAU are arguably the best known. 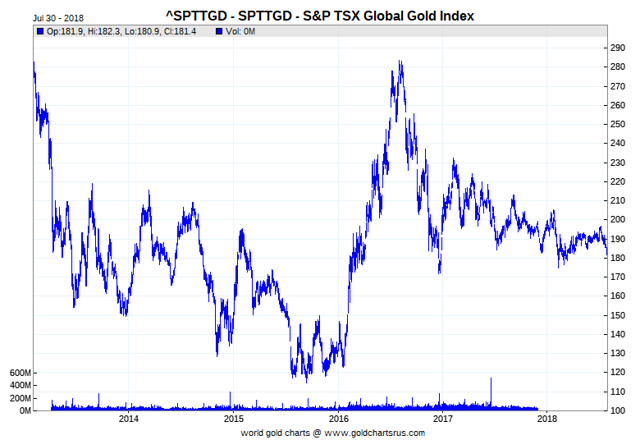 Gold Mining Equities - Not the Same as Physical Gold

Because these companies are generally involved in exploration and production, gold mining stocks also introduce operational risk, management risk, risks associated with corporate governance, risks associated with hedging the gold price (or not hedging the gold price), and political risk associated with the countries in which a company's gold mining assets are located. It is precisely because of gold mining company mismanagement that there is currently an initiative underway to launch a Shareholders Gold Council of institutional buy side money to address this corporate mismanagement.

The same is true of funds or ETFs which aim to track gold mining indexes such as HUI or GDM, albeit that a diversified portfolio of gold mining stocks that a fund holds will diversify across company specific risk, but not gold mining sectoral risk or broader equity market risk and stock market/exchange risk. 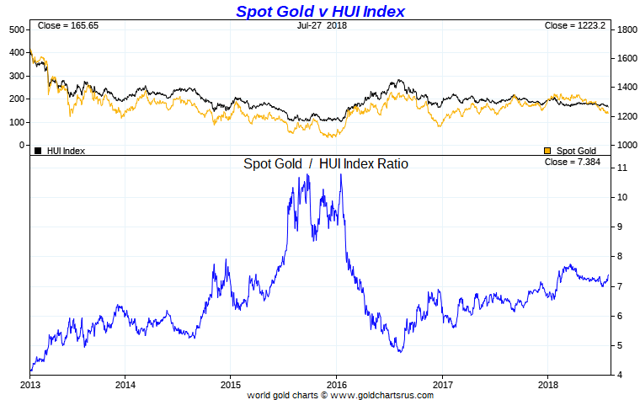 As it only includes mining companies that do not employ hedging, the HUI has a higher correlation with the spot gold price than the XAU. But neither the HUI nor the XAU track the gold price as can be seen from looking at the variability of the gold/HUI ratio and the gold/XAU ratio. 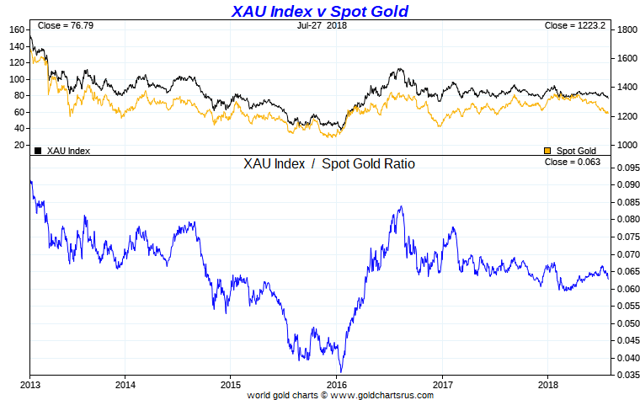 Investors can hold both physical gold and gold mining stocks and funds, Its just important to remember that they are different things, and different asset classes. Gold mining stocks are risk securities issued by corporations that trade on stock exchanges. Physical gold is a tangible asset with no counterparty risk or default risk. Physical gold exists in limited supply and cannot be created, nor can it be issued by governments or monetary authorities.

Follow Ronan Manly and get email alerts
+
Add a comment
Disagree with this article? Submit your own.
To report a factual error in this article, click here.
Your feedback matters to us!