“Had it not been for the share repurchase announcement, the shares might have been considered for a high-risk investment or trade.

Risk-tolerant investors seeking exposure to Cleveland-Cliffs might want to explore selling put options to either earn the option premium or to purchase shares at a discount to the current price.”

The CEO of Cleveland-Cliffs has been frustrated over the share price, feeling that that it is undervalued. This is understandable. In November 2018, the Board of Directors approved a $200 million share repurchase program, and then on April 24, 2019, an additional $100 million share repurchase program was approved. Let us review the prices paid for shares. 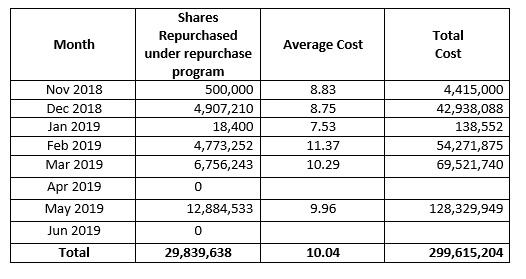 Nearly $300 million has been spent on acquiring shares. Cleveland-Cliffs reported in a 10-Q filing that there were 298,018,441 shares outstanding on October 17, 2018. Therefore, roughly $1.00 per share was spent on buying back shares. While the share price did move higher, it has since retraced the entire gain and then some.

It is unclear why so few shares were repurchased during January 2019 when the share price was lower and no shares were repurchased during April and June 2019. The share price closed on September 8, 2019, at $7.26. Therefore, the nearly $1.00 per share paid per outstanding shares as of October 17, 2018, resulted in a price decline of $2.78. The shares are lower than where they closed on January 3, 2019.

More recently, Cleveland-Cliffs announced a special dividend of $0.04 on top of the quarterly dividend of $0.06. It is unclear if the company's board has decided the best way to reward shareholders is with a cash dividend, or if another round of share repurchase plans will be announced. If the board establishes a special dividend payout ratio based upon earnings, it might provide greater investor confidence.

The CEO is quoted as saying this:

“The biggest problem for the economy right now, in Goncalves' view "is that the richest are becoming richer and the middle class is shrinking. The result of the stronger economy is not being spread out the way it should be; because capitalism is not just generating wealth - it's spreading the wealth."

The above quote is somewhat ironic given that Cleveland-Cliffs has transferred over $299 million dollar of owner’s money to those selling shares back to the firm, and that not all shareholders were given a chance to sell shares back to the firm via a Dutch Tender. There might be investors willing to enter CLF shares if the capital allocation was different. If Cleveland-Cliffs could pay $1.00 special dividend each year and the market discounted the payment at 5.0%, then the incremental increase in the share price could be $20.00.

The price of hot-rolled coiled steel traded on the CME futures exchange has been in a free fall (see chart below). 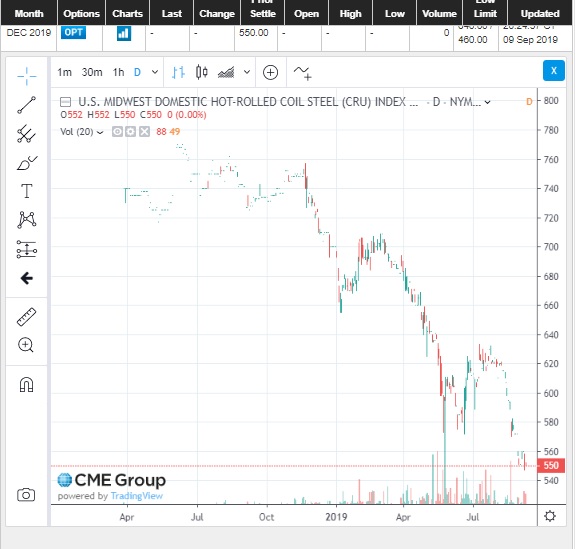 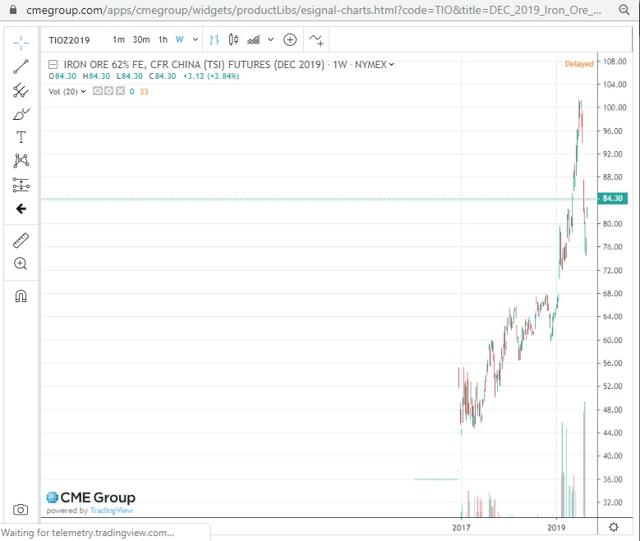 Given the weakness in the price of hot-rolled steel and US Steel's announcement that blast furnaces are being idled, the demand for iron ore pellets in the US could be at risk for a surprise. However, Cleveland-Cliffs has announced plans to send some iron ore pellets to stockpile at the HBI plant under construction.

Cleveland-Cliffs is building an HBI plant, with plans to divert some of its iron ore pellets to feed the plant. However, in an articled linked to above, the company CEO gave the impression that finding workers had become challenging. This has the potential risk to delay plant completion and/or increase the cost. However, during the recent conference call, it was announced that the HBI plant was ahead of schedule.

Investor and market sentiment appears to have turned lower for Cleveland-Cliffs. This could be a result of worries over the economy from the tariff/trade war rhetoric, or a more general concern over the outlook for the steel industry. The primary blast furnace steel stocks AK Steel (AKS), US Steel (X) and ArcelorMittal (MT) have not performed well (see charts below).

If the company's board has changed the capital allocation process to rewarding investors with cash (regular and special dividends) rather than spending the cash on repurchasing shares, then this can be viewed positively. Ideally, it would be nice to see Cleveland-Cliffs with a strong investment grade credit rating.

The more recent share repurchases have seen a loss of nearly $100 million. Some will suggest not enough time has passed, and that the reduced share count will benefit earnings per share. The lower share could will make earnings per share more volatile, and the increased risk of the shares may have investors reducing the price-to-earnings ratio they are willing to pay. Thus, a higher EPS figure could result in a lower share price due to a lower P/E ratio. Bondholders may also be concerned.

If Cleveland-Cliffs can get the HBI plant up and running and supply the arc furnace steel producers with quality and competitively priced product with attractive margins, then it might be an attractive but risky dividend stock, should the capital plan be shifted to favor dividends over share repurchases.

At the current price, $7.58, Cleveland-Cliffs appears to offer an interesting entry point for investors with a high risk appetite.

Stout Opportunities provides brief trading ideas making use of option to enter and exit position, and or generate additional income.

Pat Stout
854 Followers
Since 1978 have experienced and studied many market cycles in bonds, stocks, options, etc. Tend to question herd thinking, some might call me a contrarian. A big mistake made when young (1970’s) by avoiding bonds and investing in risky stocks. It was a great lesson in risk management. Seek long-term strategic trends while keeping an eye open for short-term tactical opportunities. Pay close attention to cash-flow statement, balance sheet and the allocation of capital. Warning flags go up when board of directors allocate owners money to departing owners via share repurchase programs. Very few share repurchase programs have been found that add value, but many that hurt fixed income investors.
Follow