Tekla Healthcare Opportunities Fund (NYSE:THQ) has been providing investors a steady distribution since its inception. This has been the case even through the March market collapse. Healthcare remains a relatively attractive area to invest in while the world deals with the pandemic on a daily basis. The large and stable companies held within THQ represent a stable area to invest in. This leaves one being sheltered from more volatility areas of the market and providing diversification. 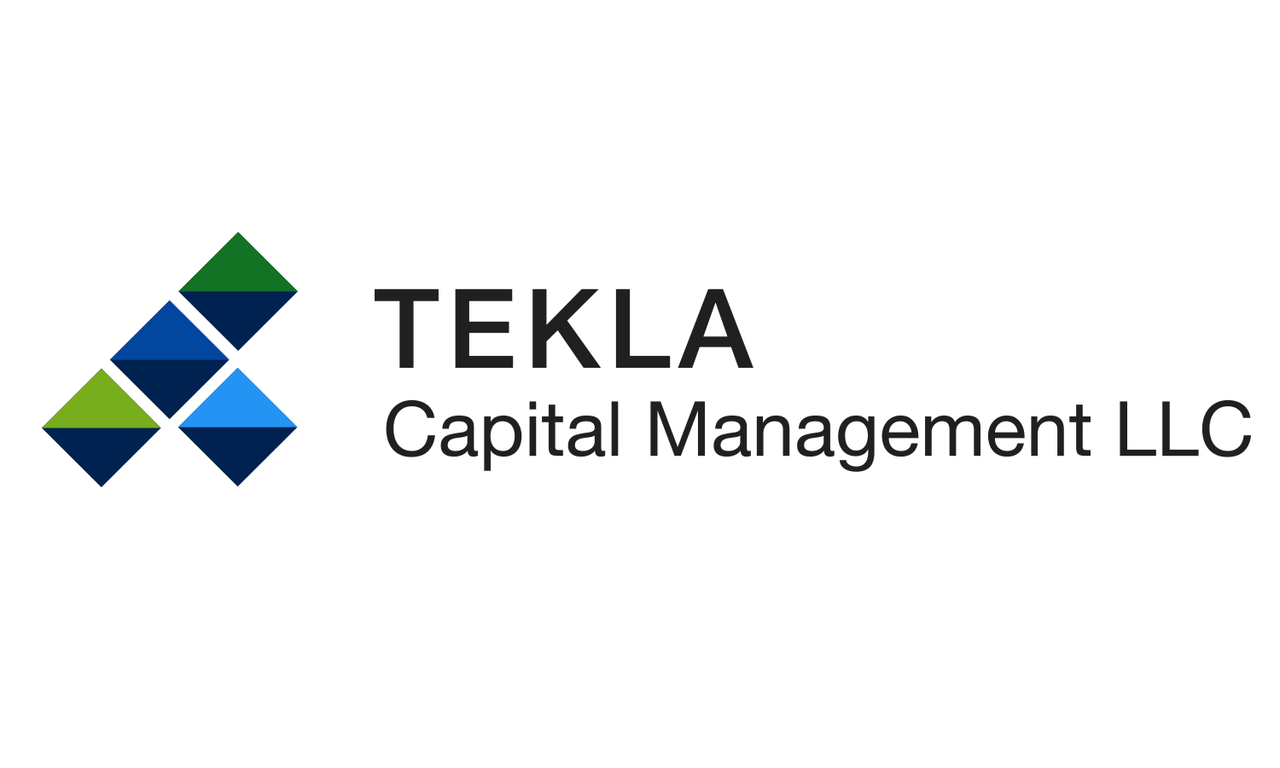 THQ has an investment objective to "seek current income and long-term capital appreciation." It attempts to achieve this through "a versatile growth and income investment strategy investing across all healthcare sub-sectors and across a company's full capital structure."

For THQ, it primarily invests in common stocks - though convertible and non-convertible notes also represent a meaningful allocation. Additionally, while the emphasis is on "across all healthcare sub-sectors;" the portfolio leans heaviest in pharmaceuticals that can be relatively more defensive. Though healthcare more broadly is defensive in nature due to the comparably stable nature of the business.

The fund is sizeable at just over $1.06 billion in managed assets. Increasing the risk from a comparable ETF is the fact that the fund does utilize leverage. Currently, this comes out to around 21.08% of assets. This is rather low, especially when considering the more stable investments of healthcare. That being said, we did see the damaging effects of leverage during March's selloff, when everything tanked.

The fund's expense ratio comes to 1.49%. When including the leverage expenses, this increases to 2.22%.

Since its inception, THQ has put up respectable returns. Being involved in the healthcare sector means that it has had to maneuver through political heat on pharmaceutical drug pricing. The fund last reported the performance at the end of June 30th.

Additionally, the fund would have also had to compete with launching shortly before the biotech sub-sector really heated up. The performance in biotech wasn't as particularly felt in THQ as it was fairly limited to the sub-sector. Overall it still put a bit of a drag on the healthcare sector's performance in 2016.

This was, of course, the last time the U.S. had an election. This year we haven't seen a similar outcome, even being an election year. I believe this is for some fairly obvious reasons; the defensive nature of the healthcare space during a black swan event specifically about a pandemic, and that equality seems to be of a particularly more important issue that is taking center stage.

That being said, I wouldn't be surprised if a change in the current White House administration would put additional pressure on the sector again. That is why looking at THQ, or healthcare in general, should be a bit of a more long-term approach.

A downturn is also a bit easier to withstand in a fund that is trading at a discount. The fund currently sports a discount of 9.42%. This can be compared to its one-year average of 10.31%. Additionally, this puts us right around the longer-term five-year average discount of 9.71%. While I don't believe that THQ necessarily deserves to be at a discount, I also don't believe that a contraction in the discount is a catalyst going forward. It seems fairly reasonable to expect the fund to trade around these levels perpetually. Of course, that also means I don't expect to see performance go against a shareholder due to an expansion in the discount either. 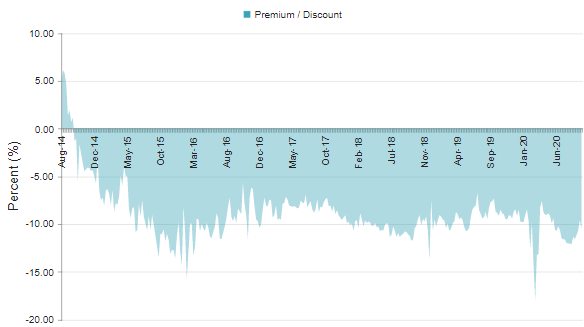 Another reason to like THQ, especially for income investors, is the steady distribution it has been able to achieve. It has had the same monthly $0.1125 rate since inception. Additionally, this seems to be a sustainable rate as well. This works out to a 7.31% yield on the share price, and an even more reasonable 6.62% yield based on the NAV price.

This sustainability is reflected in the fund's NAV per share at $20.38 - the fund came to market at a NAV of $19.06. As CEF investors, we know that NAV per share typically declines over time. In this case, the flat price can be enticing to more conservative investors.

As a mostly equity fund, it pays a significant amount classified as long-term capital gains. For the prior year, this has increased. That being said, due to the larger, more established companies in its portfolio, it can also show some amounts of net investment income too. This would be due to the dividends the portfolio collects.

The last report available is the fund's Semi-Annual Report. This was for the period ending March 31st, 2020. That does mean we should get a much better idea of its numbers in the next report when the impact of the pandemic can be better reflected in its numbers. Of course, we do still know that on a YTD basis, the fund is showing slightly positive returns. This is 0.49% on a total return share price basis and 2.05% on a NAV total return basis as of 9/30/2020, according to CEFConnect.

The fund has also been actively buying back its own shares in an attempt to close the discount. This is also positive for the distribution because buying back at a discount results in an increase of coverage to current shareholders. 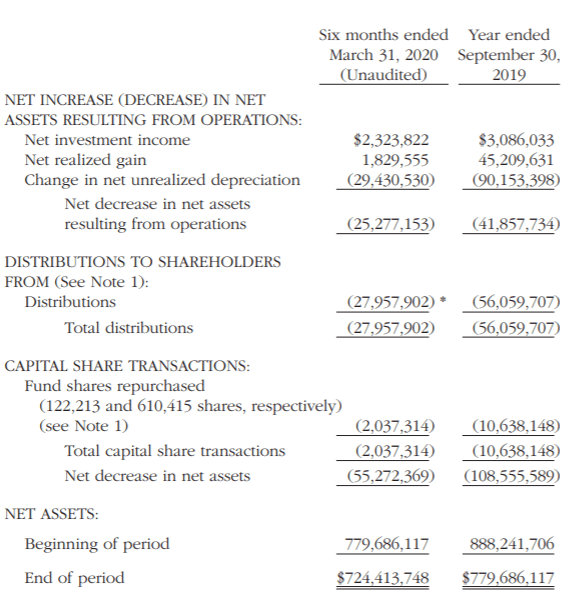 THQ's portfolio holds all of the largest and most well-known healthcare-related companies. This can be a positive for investors looking for more stability. Additionally, the portfolio's largest allocation is to the pharmaceutical sector. This provides for more steady and predictable cash flows for the underlying companies.

This is followed up by "health care providers and services." Of course, this is also another essential part of the healthcare system. The facilities that function to provide healthcare to individuals in the first place. This sub-sector did take a bit of a hit as elective procedures all but stopped during the peak lockdown period due to COVID. Now that hospitals are resuming, this has been a relief to hospitals' financials. 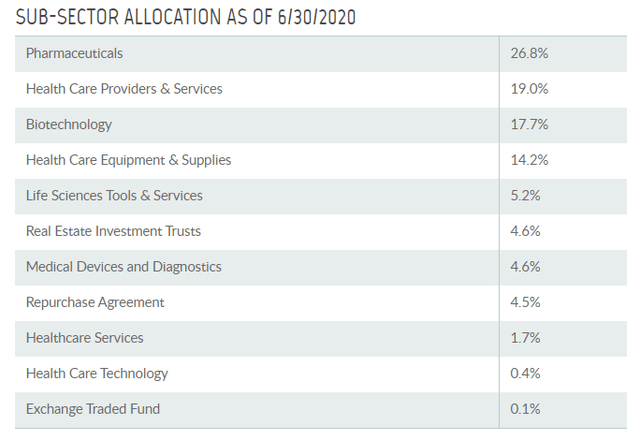 As mentioned previously, the largest allocation is to equities in its portfolio. Though "convertibles and non-convertible notes" still represent a meaningful allocation. That does mean that the fund can be even more steady than just the typical healthcare fund or ETF. Albeit the leverage can counteract this reduced risk a bit.

Since we last covered the fund, the top 10 hasn't changed excessively. This is interesting as the fund does have quite a bit of turnover in some years. For the last six months reported, this was 29.63%. In 2019, this came to 55.92%. It has been as low as 36.22% in 2017, and the highest turnover came in 2015 when it reported a 92.61% turnover. That is almost a complete turnover of the entire portfolio throughout the year. 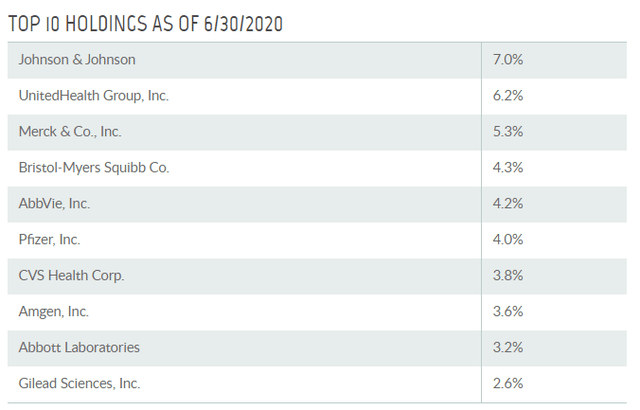 One company that has been particularly strong lately, in earnings and share price, has been UnitedHealth Group (UNH). It reported a strong Q3 on October 14th. The company also boosted its full-year outlook for 2020. This was also pronounced as it, along with the broader market, slumped in September. 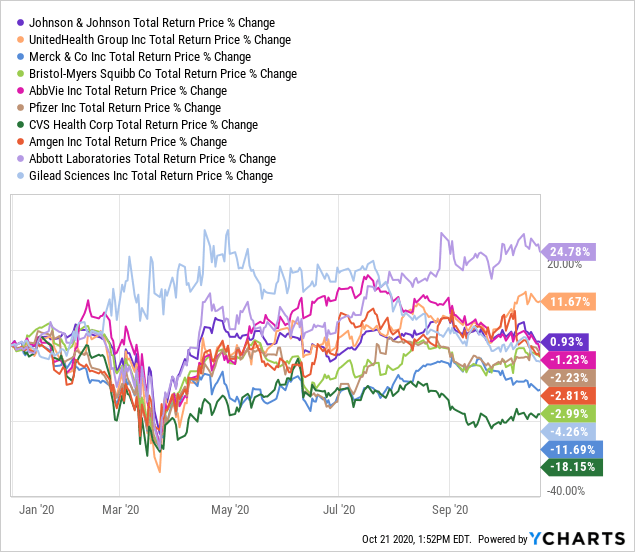 In fact, on a YTD basis, this recent strength has propelled UNH above many other of THQ's top 10 positions. The only stock acting stronger on a YTD basis has been Abbott Laboratories (ABT). Gilead Sciences (GILD) was also doing really well at one point. Defying gravity during March's bear market, only to come down significantly after and now be down on a YTD basis.

Of course, this came as investors were a bit too optimistic about Remdesivir as a treatment for COVID. For ABT, this strength on a YTD basis has come from strong earnings and its involvement with COVID testing.

The company just reported its earnings (October 21st, 2020.) Interestingly enough, it appears the only segment of its business that was down was the "established pharmaceutical" business, representing a decline of 9.3%. It highlighted this as being due to most emerging markets and COVID-19.

Key Emerging Markets include India, Brazil, Russia and China along with several additional emerging countries that represent the most attractive long-term growth opportunities for Abbott's branded generics product portfolio. Sales in these geographies decreased 10.3 percent on a reported basis in the quarter and decreased 1.8 percent on an organic basis primarily due to market softness across several countries as a result of the spread of COVID-19.

The strength and stability in the healthcare space make me believe THQ remains an excellent choice. The fund provides attractive and achievable monthly income while also providing diversification overall in the sector. The fund's current discount presents an attractive entry too. It is right around its long-term average. Though it trades almost consistently near this level, it is also a good indication that it won't collapse suddenly sending share price returns lower due to a widening discount.

The fund does utilize leverage to potentially increase returns. We did see the big downside to this during the bear market of this year. However, over the longer term, it has been able to successfully manage the leverage. It also doesn't represent a highly leveraged CEF as it is around 21%. The allocation to fixed-income investments in the space can also offset some of this downside during times of volatility.

The healthcare that THQ is invested in can provide stability for investors. This is especially true as we head into the winter months while still grappling with COVID and the uncertainty that brings as cases continue to rise.

Disclosure: I am/we are long THQ, UNH. I wrote this article myself, and it expresses my own opinions. I am not receiving compensation for it (other than from Seeking Alpha). I have no business relationship with any company whose stock is mentioned in this article.