In a month during which virus containment measures were tightened in the face of further waves of infections, the eurozone economy showed encouraging strength. The eurozone flash PMI once again beat expectations, exceeding the consensus for a second month running in April, with a record expansion of manufacturing output accompanied by a tentative return to growth in the service sector.

The headline IHS Markit Eurozone Composite PMI® rose from 53.2 in March to 53.7 in April, according to the preliminary 'flash' reading, which is typically based on approximately 85% of final responses. The consensus, according to Reuters, was for a reading of 52.7.

Output has now risen for two months after four months of decline, with the latest expansion the second-largest recorded since September 2018. 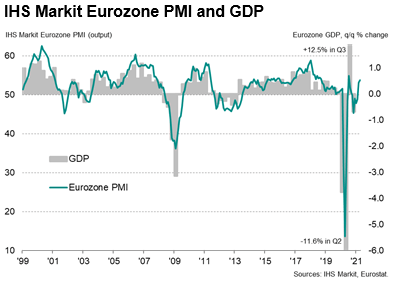 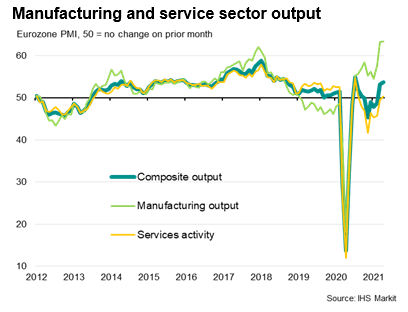 Although the service sector continued to be hard hit by lockdown measures, it returned to growth as companies (and their customers) showed further signs of adjusting to life with the virus and preparing for better times ahead. Service firms reported the first expansion of activity since last August, albeit growing only very modestly.

Although the return to service sector growth seen in Germany during March came close to stalling in April after new lockdown measures were introduced to control further waves of the virus, both France and the rest of the eurozone saw marginal expansions for the first time since last summer. 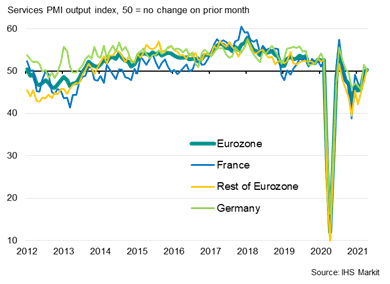 The manufacturing sector is meanwhile booming. Pent-up spending, restocking, investment in new machinery and growing optimism about the outlook have all helped fuel a further record surge in both output and new orders.

Manufacturing output grew for a tenth straight month, expanding at a rate unsurpassed in over two decades of survey history. Germany led the factory upturn, its rate of increase easing only slightly from March's all-time high to remain the second-strongest on record. France's factory expansion also slowed slightly, though remained the second-best seen over the past three years. Record manufacturing output growth was meanwhile seen across the rest of the region as a whole. 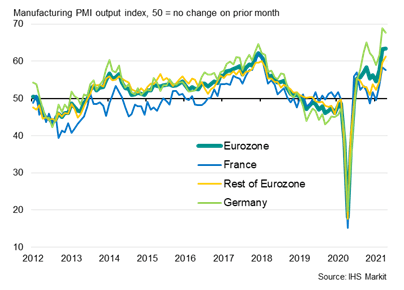 Other survey indicators brought promising signals for the coming months. New order growth across the eurozone hit the highest since September 2018, led by a second-successive record increase in new orders for manufactured goods. In contrast, new orders for services fell for a ninth successive month, though came close to stabilising. 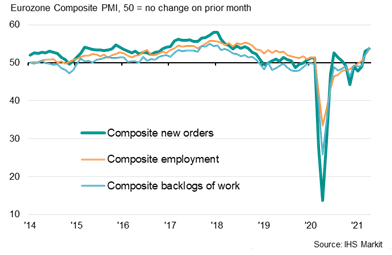 Backlogs of work grew for the second month in a row, rising to an extent not seen since January 2018, as firms struggled to cope with the influx of new business. A survey record increase in manufacturing backlogs was joined by the first increase in outstanding business in the service sector since the pandemic began.

Future expectations also improved, climbing to the highest since comparable data were first available in mid-2012. Although sentiment slipped slightly lower in Germany, it remained close to March's survey high. In contrast, firms in France and the rest of the region as a whole grew more optimistic, the latter reaching unprecedented levels as virus recovery hopes continued to build. 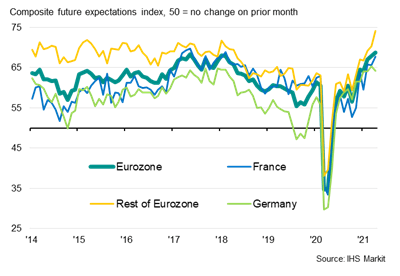 Companies responded to the accumulation of uncompleted orders and brighter outlook with a third successive month of net hiring, with employment growing at the steepest pace since November 2018. Manufacturers saw headcounts rise at a rate not seen since February 2018 while a far more modest rate of job creation was seen in the service sector, although even here the rise was the largest since the onset of the pandemic. 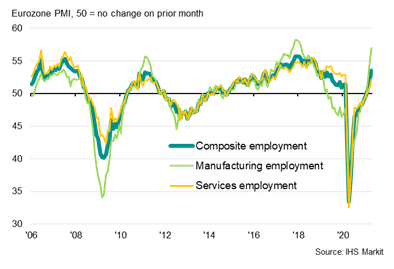 The return to growth was accompanied by a further increase in inflationary pressures as demand revived and costs increased. 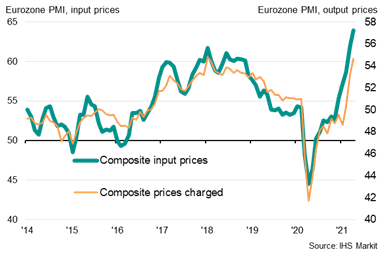 The better than expected April flash PMI data come on the heels of the latest ECB Governing Council meeting, where policy was left on hold as policymakers assess the outlook. Tightening financial conditions via rising bond yields had prompted the ECB to step up the pace of asset purchases from around €15bn per month to up to €20bn in its March meeting, and this short-term increase in asset buying was felt to be appropriate at the April meeting. No change is expected until the June meeting, meaning the data flow in terms of economic indicators, the COVID-19 environment (infection rates and vaccine progress) and financial conditions will be all important in steering any potential policy change.

The increase in the business activity indicators from the eurozone PMI, notably the output and new orders indices, will provide encouragement to the ECB that the recovery is showing resilience amid further waves of COVID-19. The upturn in prices will of course also allay near-term concerns over deflationary pressures but is also expected to provide short-lived, presenting few core inflation worries. 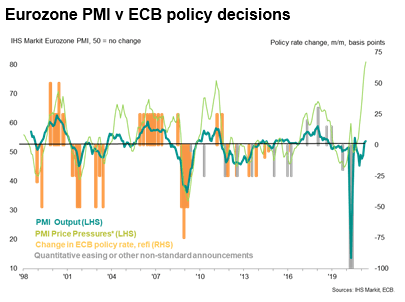 Policymakers will be eager to see lockdown measures ease in coming months - as is the current envisaged roadmap from the single currency area's various governments on average (see chart). An even stronger recovery is suggested by the easing of virus related restrictions, which would suggest little scope for any further monetary accommodation. The focus, however, remains on averting any tightening of financial conditions, and in particular any potential rise in sovereign bond yields. 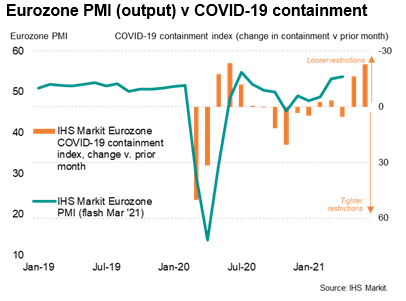