The au Jibun Bank Flash Japan Composite PMI, compiled by IHS Markit and published ahead of the final PMI results, indicated Japan's private sector shrank for a third straight month in July. The Flash Composite PMI Output Index slipped to 47.7 in July from 48.9 in June, indicating an increased rate of decline. Although both services and manufacturing output indices declined, manufacturing managed to sustain moderate growth while services activity slipped further into contraction. 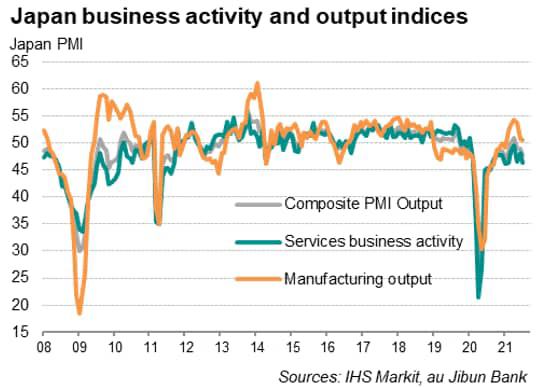 Amid the extension of a state of emergency across Tokyo through the Olympics, and quasi-emergency measures seen in various other prefectures to stem the fourth wave of COVID-19, the current downturn may not come as a surprise and further outlines the strain on the Japanese economy, particularly the service sector, from the pandemic. Service sector firms saw demand shrink for an eighteenth consecutive month and were pushed to shedding jobs, according to flash data, after having continuously expanded their workforce for five straight months. Broadly, private sector firms also reined in some of their optimism seen ahead of the Tokyo Olympics commencement.

Japan and Australia economies in contraction with Delta variant spread as the US, UK and Eurozone remain in strong expansion

Assessing the indications from July flash PMIs, we have seen the eurozone signalling the fastest economic growth for 21 years. The US and UK composite flash PMIs had eased, but notably from multi-year highs and remain at elevated by historical levels.

In contrast, Australia and Japan both saw their economies contract in July, according to flash PMI indications, suffering the disruptions from the more infectious Delta variant. Both Japan and Australia also lag various developed-world counterparts pertaining to their vaccination progress, highlighting the importance of ramping up inoculation to enjoy vaccine dividends. 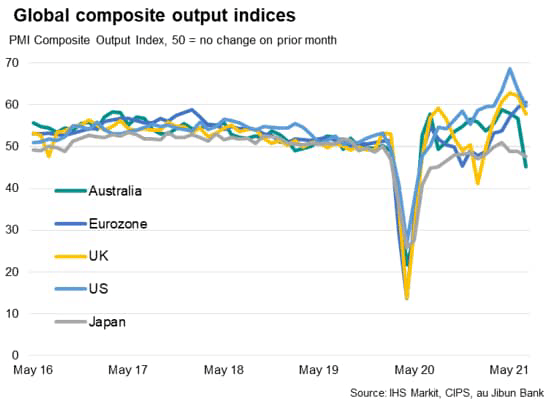 Zooming into the effects of the Delta variant spread, one would intuitively expect services to be relatively more affected than manufacturing, and that had certainly been the case in July. Despite the resurgence of COVID-19 cases amongst APAC economies, Japan and Australia manufacturing PMI continued to run above the 50.0 no-change mark, however, and continued to see their suppliers' delivery times lengthening as demand remained resilient.

It will be of interest to assess if the early indications are indeed widespread through the upcoming July global PMI releases, to outline the gap between the Delta variant implicated APAC region and the relatively resilient developed world, boosted by their vaccine advantage. 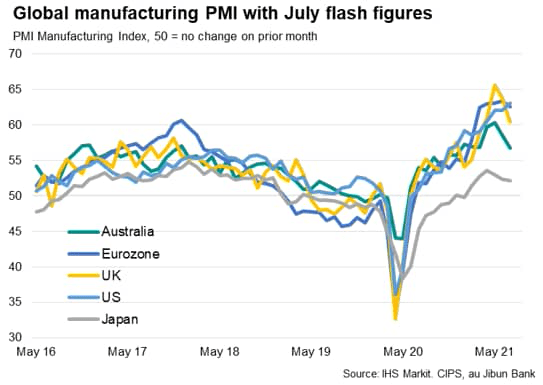 Markit
2.45K Followers
IHS Markit (Nasdaq: INFO) is a world leader in critical information, analytics and solutions for the major industries and markets that drive economies worldwide. The company delivers next-generation information, analytics and solutions to customers in business, finance and government, improving their operational efficiency and providing deep insights that lead to well-informed, confident decisions. IHS Markit has more than 50,000 key business and government customers, including 80 percent of the Fortune Global 500 and the world’s leading financial institutions. Headquartered in London, IHS Markit is committed to sustainable, profitable growth.