For anyone new to ANVS, I have previously covered this company (here, here). 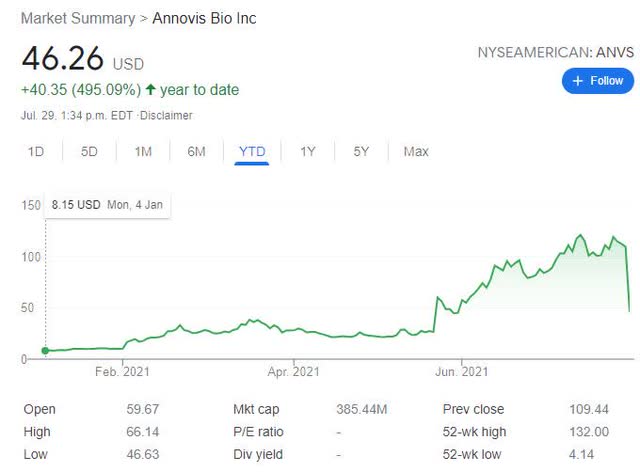 It seems the gain was mostly due the positive early data from the p2a AD/PD trials, especially positive cognition data seen in AD patients, released on May 21 (see below; emphasis added)

On the heels of such positive AD data, it is perhaps understandable, that the investors expect or speculate optimistically about the new data which the company was to present on the evening of July 28 at AAIC.

From the current stock price action (July 29), it is clear that the news did not meet investors' expectations! 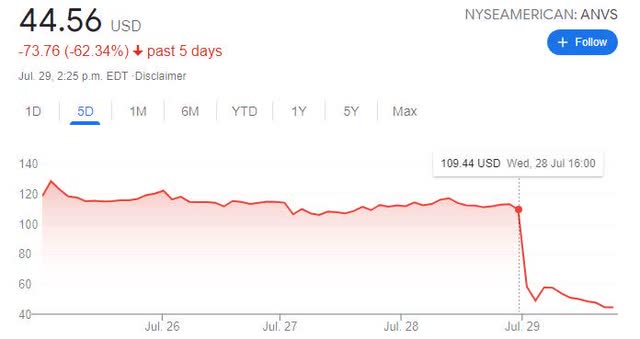 Let's now turn to the data to try to understand the sell-off.

In addition to the slide presentation, ANVS also released a PR, which summarizes the p2a results in a table (see below) 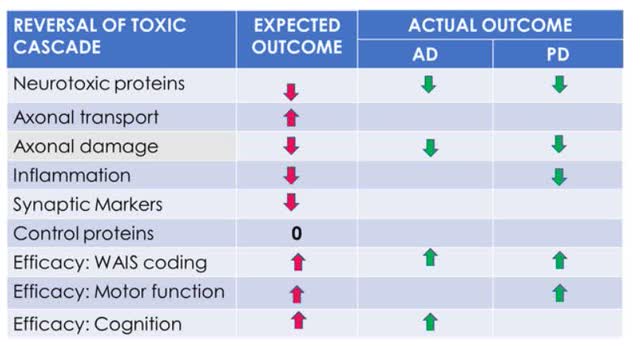 According to this table, the green arrows indicate that the actual outcomes for the items studied in the p2a trials are in the SAME direction as the expected outcomes.

In other words, ANVS's p2a AD/PD trials data are as the company expected or hoped to see going into the trials, in the items disclosed so far.

Let us take a closer look at the new data.

Here is the data: 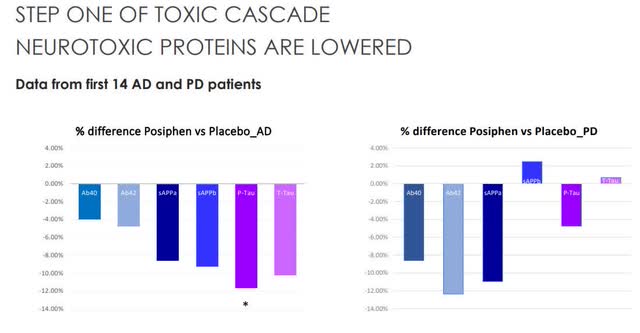 Nevertheless, Posiphen groups have lower amounts of toxic proteins than the placebo groups for all proteins in AD; and for all but two (APPb & s-Tau) in PD patients.

2. Slide 16 shows another data point that is statistically significant in AD. 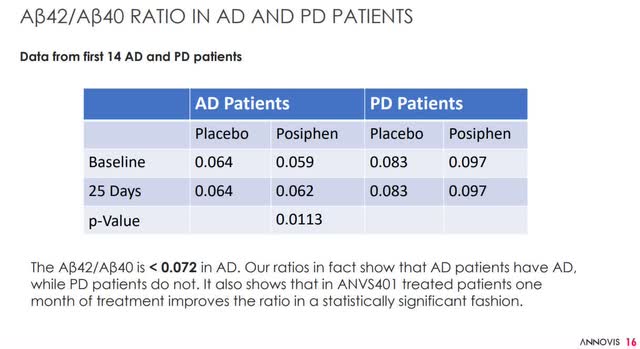 Although all the new data are in the right direction, positive trending, very few data points have reached a statistically significant difference against the placebo group.

Given these are very small p2a trials (n=14 in AD/PD each) and a short time frame (25 days), these positive-trending results are perhaps as good as the results could be expected to be.

However, as far as the stock market reaction is concerned, perhaps the expectations were way too optimistic or hyped, being influenced by prior PRs.

In my opinion, today's ~60% crash is a reflection of disappointed expectations, as these new data, relative to the previously disclosed ones, are less clear (e.g. MMSE, CDR in cognition benefit vs. ADAS-Cog11) and less conclusively positive (e.g. new biomarker data vs. PD biomarker data).

It is not certain that in the next trials, presumably larger and for a longer duration, these positive trending p2a data will be repeated or become stronger, e.g. showing statistically significant, placebo-adjusted, treatment benefits.

I am still invested but with a half of the position size, as I did not want to hold a full position through the readout.

This [taking profit/reducing a position size before a readout] is new for me. It is a lesson I learnt from other readout crashes, which for small cap R&D biotech space are unfortunately common.

I think ANVS will continue with their endeavor to develop treatments for AD, PD, AD in Down Syndrome etc., as the p2a trials have generated positive data in both efficacy and biomarker data.

As previously disclosed, ANVS plans to meet with the FDA after the completion of the p2a trials to discuss the regulatory process forwards, and plan to start p3 trials by the end of 2021, if the EOP2 meetings are successful.

In my opinion, if ANVS continues to make positive progress and ultimately succeeds in phase 3 trials, the stock will no doubt recover from today's crash and go on to a new high to reflect the successes.

Both AD and PD are serious unmet medical needs with huge addressable market, as evidently in the case of BIIB's Aduhelm.

On the other hand, if ANVS ultimately does not succeed, like so many other AD developers, then the stock will no doubt reflect that defeat, as Posiphen is their lead candidate and other candidates, with similar MOC, are still in the early pre-clinical stage.

The process will take time and the stock is likely to be very volatile, with a binary risk/reward at the end of this long process.

Please do your own research and consider your risk tolerance as well as investment timeframe before making any decision.

Thank you for reading. All the best to you!

C. C. Abbott
3.16K Followers
Both my spouse and I have a DPhil from Oxford University. Mine is in Cell Physiology and his is in Bio-organic Chemistry. Our investment focus is on small/micro cap biotech. My SA articles are not stock tips/predictions, financial advice or substitutes for your own due diligence. I'm not a financial adviser. I wrote SA articles for myself and for anyone who find reading & considering SA articles helpful in their investment research. Wishing you the best in seeking & finding alpha through biotech investing!

Disclosure: I/we have a beneficial long position in the shares of ANVS either through stock ownership, options, or other derivatives. I wrote this article myself, and it expresses my own opinions. I am not receiving compensation for it (other than from Seeking Alpha). I have no business relationship with any company whose stock is mentioned in this article.

Additional disclosure: My articles are not investment recommendations, and I am not an investment adviser. Small/micro cap, clinical stage biotech stocks are highly volatile, speculative, and risky. No clinical trial is guaranteed to succeed, even with strong science, prior positive results, or bullish SA articles. When a trial fails (and the company stops the program), small/micro cap biotech stock can decline very significantly. Also, since these companies have negative revenue, the financial risks such as dilution or insolvency are always present. Investing in these stocks may result in a partial or complete loss of investment. Conduct your own due diligence before making any investment decision. You are responsible for your own investment decisions.