This article was first released to Systematic Income subscribers and free trials on Oct. 22.

Steadily lower CEF yields and recent volatility due to rising Treasury yields have underlined the attraction of alpha-generation strategies. In this article, we take a look at a number of relative value CEF opportunities in the preferreds sector. Specifically, we review previous ideas and highlight new ones across the PIMCO, John Hancock, Invesco, and other funds.

It may seem like allocating to CEFs based on a relative value basis is a strategy best suited for highly tactical investors. However, that is not the case. Our approach to relative value allocation in CEFs is firmly grounded on a value and margin-of-safety framework. In short, if investors can achieve a broadly similar asset allocation via a cheaper and more resilient investment vehicle, they should do that, taking into account, as always, any relevant tax considerations.

Another point worth making is that with the yields on both underlying assets and CEFs at historically tight levels, a strategy that can deliver alpha - or an additional return over and above a static allocation is now worth that much more in relative terms. In other words, investors who can generate an additional 1% through CEF relative value in a world of 5% yields are that much more attractive than in a world of 10% yields. 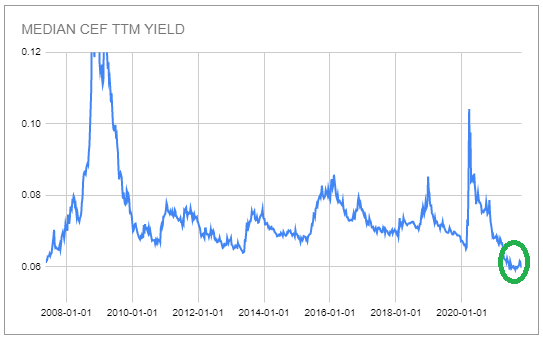 Something else worth highlighting, particularly in a market environment of rich valuations, is that a relative value approach is defensive. This is because higher premium funds deflate more quickly during drawdowns, meaning investors who continue to be allocated to higher premium funds tend to take heavier losses than those in cheaper alternatives during periods of market volatility. And although there is not always a perfect cheaper alternative, more times than not, there are funds with very similar portfolios and historic returns that trade at more attractive valuations.

For example, the premium differential between the two PIMCO California funds in the chart compressed sharply during the COVID drawdown. This is just one of very many examples. 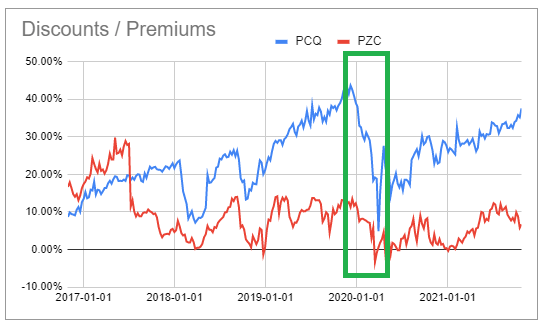 Finally, a relative value approach to the CEF space allows investors to avoid losers which is just as important, if not more, as picking winners. For example, many investors were drawn to the Stone Harbor EM Income Fund (EDF) double-digit distribution rate which was not only unusually high for credit CEFs but well above the distribution rate of its nearly identical sister fund, EDI. Needless to say, the recent normalization of the EDF distribution has nearly collapsed the premium differential, driving a negative 26% total price return for EDF over the past 2 years - something that could have been easily avoided for its shareholders.

The last time we highlighted CEF relative value opportunities was about a year ago when we focused on the preferreds sector which tends to be particularly rich in rotation alpha.

We highlighted the divergence between FPF and DFP - two preferreds CEFs that, though they are managed by different fund families, have broadly similar portfolios and historic returns.

At that point, DFP ran up to a low-double-digit premium advantage over FPF which didn't make a ton of sense. The chart below shows that while total NAV returns (orange bars) since that point are about the same, FPF has more than double the price return (blue bars) of DFP. 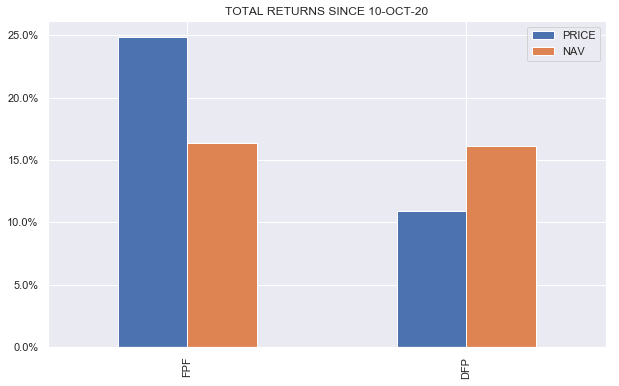 Another pair we highlighted was the Flaherty preferreds CEF pair of PFD and PFO where PFD ran out to an unusually high premium advantage over PFD. Though the fund kept on going for some time after the article, its premium has recently collapsed.

The net result is that while the two funds delivered similar NAV returns, their total price returns are hugely different. 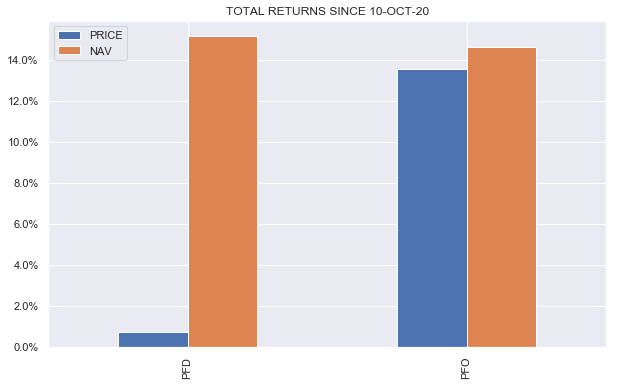 It's important to highlight that these recommendations are not based on just valuation divergence. This, in and of itself, would not be particularly interesting since lots of funds see changes in their valuation for all kinds of fundamental reasons. The key is that the portfolios selected for our relative value recommendations pass a number of other tests such as total NAV returns, NAV return correlation, and net investment income NAV yields to ensure that their portfolios are broadly similar. This means that the relative value divergence is unlikely to be driven by any fundamental reason and is more likely to mean revert. This can give investors more confidence that by rotating they are acquiring a similar set of assets at a more attractive valuation.

Since then, though DFP actually managed a stronger total NAV return than FLC, FLC delivered a total return that is nearly double and about 10% above that of DFP, equivalent to about a year-and-a-half of distributions. At current valuations, our view is that DFP is now slightly cheap to FLC given its lower fee and similar portfolio. 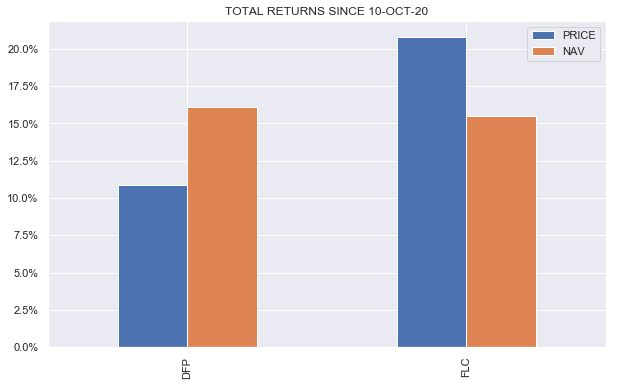 In the sections below, we highlight current relative value opportunities we see in the market.

The trio of PIMCO California tax-exempt funds has been on our radar for some time. The recent premium divergence between PCQ and PZC/PCK hit a record high - PCQ and PZC premiums are shown in the charts below.

The reason why PCQ has been rewarded with a much higher premium has to do with its higher distribution rate on NAV. As the extract below from our CEF Investor Tool shows in the NAV Current Yield column, PCQ distributes 5.63% on NAV while PCK distributes 4.32%.

What's worse is that because investors bid up the price of PCQ, the income they receive, once the premium differential is taken into account, is actually lower than that of the other two funds. In other words, investors tilt to PCQ because its NAV distribution rate is higher but end up receiving an NII yield on price that is actually lower. We can see this in the Covered Yield column in the table above which is equivalent to the NII Yield on Price. It is clear that the market bids up the premium of PCQ until its distribution rate at 4.09% is roughly equal to that of PCK at 4.03% and ignores the fact that its NII yield on price is now well below the other two funds in the PIMCO California tax-exempt suite.

One way we can see this dynamic is by looking at the coverage and UNII trends of the three funds. Because PCQ overdistributes, its coverage (left chart, red line) has consistently been below that of PCK. Its UNII (right chart, red line) is also on a very different path and will shortly dip into a deficit. This suggests it is likely to make a heavier cut to its distribution - something that investors already experienced with PTY.

The chart below shows that while the two portfolios track each other fairly well, PDT has pulled away from HTD, particularly coming out of the COVID drawdown. That said, its 3y total NAV return is 9.7% versus 8.6% for HTD - not a million miles away. 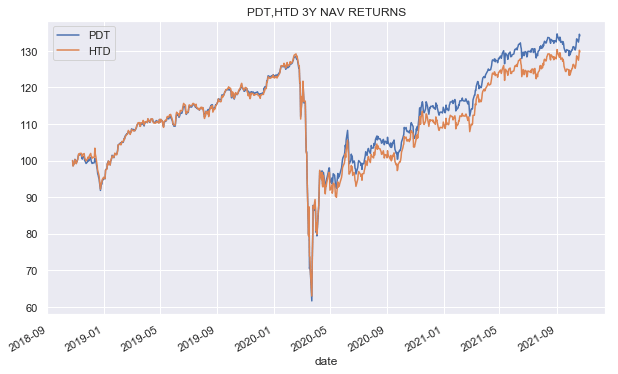 It seems that PDT has been rewarded for this outperformance with a valuation that is 20% above that of HTD - something that looks a tad rich. After all, even if PDT can, in fact, deliver 1% annual NAV outperformance in perpetuity - (a big if since it hasn't done that consistently and the two funds are run by the same managers), paying a 20% premium for that 1% is steep.

This pair of funds is very similar - boasting similar portfolios, leverage levels, and returns. The 3y total NAV return differential between the two funds is just 0.28% (13.92% vs. 13.64% CAGR). The key difference between the two funds is that NCZ has a higher leverage cost of 1.46% on net assets vs. 1.12% of NCV due to its higher reliance on fairly-expensive $25-par preferreds.

Historically, NCV has traded at a higher valuation which reflects this lower leverage cost. From a fundamental valuation perspective, the current valuation difference of 4% is not far from fair value. However, the market has not awarded NCV a consistent valuation premium - the right-hand chart below shows that the valuation difference between the two funds has been highly mean-reverting. This dynamic offers an opportunity for more tactically-oriented investors.

We have held one of these funds (depending on valuation) in our High Income Portfolio since inception in Q3 of 2020 for their partial floating-rate profile, term structure, niche sector, and cyclical exposure to a recovering economy via commercial mortgage securities. These funds tend to fly under the radar but over the past year, they have delivered total returns north of 30%, easily outpacing the vaunted PIMCO taxable funds which managed "only" around 21% on average.

IHTA has slightly longer maturity assets that match its 2024 target maturity date and so tends to behave in a higher beta fashion than IHIT. Apart from this, the portfolios are broadly similar.

IHIT is currently trading at an elevated valuation relative to IHTA - about 4% higher. That doesn't sound like much but it's at the higher end of a mean-reverting pattern we can see in the right-hand chart below. Plus, given the fund's expected 2023 termination, its 4% premium is beginning to act like a headwind for its performance.

There are many other ideas for which there isn't enough space. Subscribers and free trial users can peruse all the opportunities in our CEF Investor Tool, sorted by fund similarity and alpha potential. A screenshot of the Municipal sector is provided below as a starting point for investors who want to do their own homework. 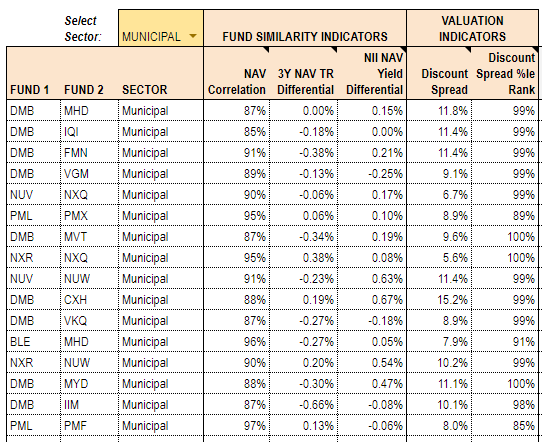 Steadily lower CEF yields and elevated price volatility have underlined the attraction of pursuing relative value opportunities in the CEF space - strategy that offers a way to generate additional alpha for investors. It can also provide an attractive diversifier and an independent source of returns for income investors who are now facing a harder hill to climb after a strong year-and-a-half of performance.

Disclosure: I/we have a beneficial long position in the shares of IHTA, NCV either through stock ownership, options, or other derivatives. I wrote this article myself, and it expresses my own opinions. I am not receiving compensation for it (other than from Seeking Alpha). I have no business relationship with any company whose stock is mentioned in this article.