Every year, average American taxpayers work for more than three and a half months for the government (four in high tax states such as my state of Connecticut) without pay. This is more than we spend on food, clothes, and housing combined. And the current administration wants to hike taxes much higher. They see private property as merely a government funding mechanism. They have no limiting principle to how much they take - it's limited only by political opposition. So what's a self-seeking, rational taxpayer to do? Pay what you owe, but arrange your affairs to owe as little as conveniently possible. There are three ways to maximize your family's after-tax wealth by avoiding overpaying a corrupt and profligate government with your hard-earned money.

If the federal government is going to take several months of your labor each year, the least you can do is not add insult to injury by living in a high tax state like I do. My favorites are Wyoming and New Hampshire. But my favorite US tax jurisdiction is Puerto Rico. And if you want to go all the way to expatriating (or at least have a second passport ready so that you can take that step quickly in a pinch), I like Dominica.

If you love your kids more than the IRS, you want to make sure that you die with less than $11.7 million to avoid getting slammed with an estate tax (on money that was already taxed once when you earned it and taxed again when it is invested). Maxing out their 529s is a start, which gets you to $370,000 per kid. I want to push as much compounding down generationally, so also take advantage of today's low rates. The annual gift tax exemption is $30,000 per couple to each kid. One could gift that to allow them to build up savings. Better yet, take advantage of today's low interest rates. The current applicable federal short-term rate is 0.33%, so make a rolling short-term loan to each kid and gift the interest payments due to you. By that means you can lend up to $9,090,909 per kid for them to invest.

A third way to avoid the tax man is to dump shares in your losers before year end to lower your capital gains taxes. There's a time and a place for this. But I prefer to find opportunities to buy other people's losers when they've been pushed to prices far beneath their value. Something always on my mind is the question, "why are sellers selling something to me?" In this case, I have a great counterparty - someone who simply wants a tax benefit. We might actually both add to our after-tax wealth if he gets the tax benefit and I get the bargain. So if over the course of the next month you see this year's losers plunge further, you might want to scoop some of them up. Here are three worth your time.

Amplify has been a disaster since well before its recent oil spill. 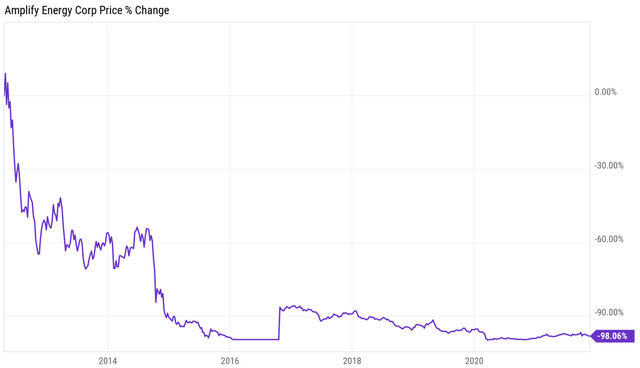 That's a whole lot of losses for investors to take for tax reasons. And they also may want to take the L for political reasons - in this era of ESG mania, owning an oil and gas company leaking oil onto California beaches could be a bad look for anyone who wants to burnish their green credentials.

But at today's price it's a terrific investment. Shares currently trade for under $3. Alternatively, you can collect premium by writing December $2.50 puts. If shares dip further due to tax selling, you might get put shares at an optimal time close to their lows. Share could continue to plunge over the next month but are worth at least twice what they cost today. It was a cheap stock before the oil spill and cheaper after. And Amplify wasn't the perpetrator - it was the victim of a vessel that ripped open their pipeline with an anchor. The major liability is the ship's. The ship will be identified and the owner will pay.

Over the long term, PDEX has been magnificent, returning more than 700% since I first read about it in Follow The "Pros" Into Pro-Dex? 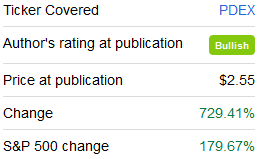 But it has weakened considerably over the past year. 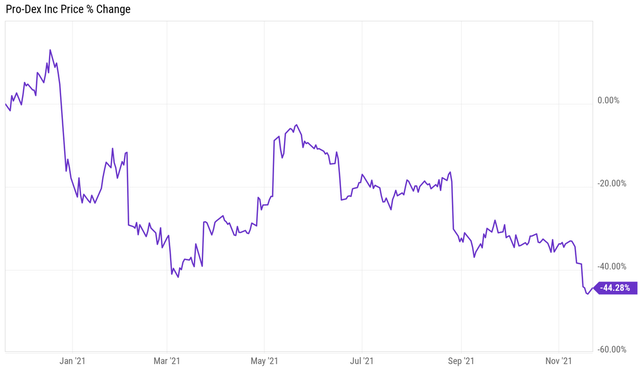 That has left it trading somewhere between half and a third of what it's worth today. If you can buy it under $25 per share from tax loss harvesters between now and year end, you will be getting it for a steal. 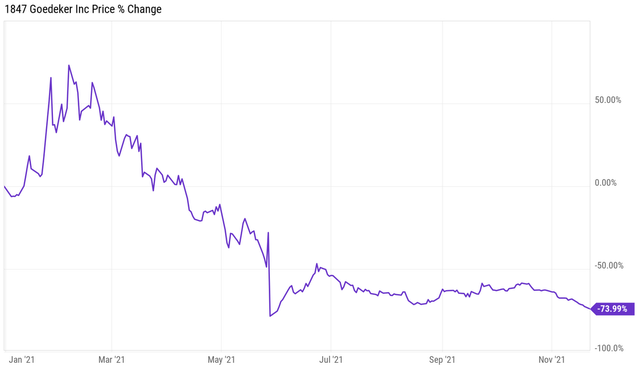 1847 Goedeker is a strangely named company worth at least $5 per share. It's a cheap stock for a money-making business. They issued a massive number of shares to buy appliance e-commerce site Appliances Connection. It was unexpected and hated by pre-deal shareholders, but I simply disagree with their reaction. It trades at less than half the multiple of Overstock.com (OSTK) and deserves less of a discount. Want a yieldy and cautious exposure? Write December $2 puts. It could be a great way to back into a cheap stock getting puked by tax loss harvesters.

Want a bit of heat? Buy their (GOED.WS) warrants for under $1.25 per warrant. They have an exercise price of $2.25 and expire after five years from issuance. They are worth a multiple of what they cost today.

What draws my attention to this? I'm neutral to surprises and existing shareholders tend to hate them. I'm also neutral to preceding catastrophes and shareholders tend to hate them too. So if I can find an M&A deal that shocked and infuriated holders causing the price to plummet, then I take an interest. In this case, I find the deal justifiable. GOED's share issuance and warrant issuance might be disrupting the normal market function. I'm happy to take the other side from anyone that wants to dump shares in such cases.

Pay the government what you owe but not $0.01 more. Live in Wyoming, New Hampshire, or Puerto Rico. Lend your kids all that you can for them to invest. And be a service provider to investors dumping their losers at year end for tax losses: Buy what they are selling when they sell too cheaply.

Buy AMPY, PDEX, and GOED. They could continue to wilt between now and New Year's Eve but the basket of these three could double or triple within the next two or three years.

Want to increase your after tax wealth even more? Join StW today.

Disclosure: I/we have a beneficial long position in the shares of GOED.WS, GOED, PDEX, AMPY either through stock ownership, options, or other derivatives. I wrote this article myself, and it expresses my own opinions. I am not receiving compensation for it (other than from Seeking Alpha). I have no business relationship with any company whose stock is mentioned in this article.