Altria (NYSE:MO) and Philip Morris (NYSE:PM) are staples in millions of retiree portfolios and for good reason.

Altria is not just a legendary dividend king, with 53-year of consecutive dividend increases to its name, but it's also the best performing stock in history.

And what's more, both companies, thanks to their low volatility, and recession-resistant natures are helping income investors sleep well at night during this bear market.

The worst bond bear market in history means that so far this year, bonds have not been a hedge against falling stocks.

Many income investors own both companies, as do I.

Many income investors sleep well at night cashing these very safe dividends, as do I.

But recently something important changed about one of these companies' investment thesis that you should be aware of.

It pertains to which is the better long-term investment today.

In other words, this breaking news means that with the question of MO vs PM, the better investment might shock you.

Philip Morris: The King Of The Smoke-Free Future But...

Morningstar considers PM the best-managed tobacco company in the world, and most analysts, rating agencies, and I agree, for one big reason.

The company began investing in IQOS heat sticks in 2014 and since then it's spent $9.2 billion on transitioning to a smoke-free future.

PM's future goals are based on

In other words, within about 20 years PM might no longer sell cigarettes and be no more controversial than alcohol companies are today.

Thanks to IQOS PM HAD become the growth king of tobacco, posting 10.5% annual growth over the last five years.

The company is spending about $1 billion per year, virtually its entire R&D budget, laser-focused on the day when it doesn't sell a single cigarette to anyone, anywhere, ever again.

PM's more than $9 billion in IQOS spending has paid off, with IQOS now the 2nd most popular nicotine brand in the world, at least in the markets it's currently in.

Management's primary goal is a smoke-free future, with goals of getting more than half of revenue from RRPs by 2025.

BUT that was last year and today the world has changed, in a big way.

MO has zero exposure to the war directly because its sales are 100% domestic.

PM's RRP sales growth is still strong at 23% and it managed to still gain over 1 million IQOS users, excluding Russia and Ukraine.

Russia and Ukraine account for 23% of IQOS volumes, which means that this war is proving a potentially significant blow to PM's smoke-free future plans.

Philip Morris Makes A Big Move And There Is Risk Involved

After announcing the $16 billion acquisition of Swedish Match, two of PM's three rating agencies are considering cuttings their credit rating.

The negative CreditWatch placement reflects our view that there is an increased likelihood that we could lower the rating on PMI by one notch. PMI proposed acquisition of Swedish Match assumes a total consideration of about $16 billion, to be paid fully in cash. Under our base case scenario--accounting for the proposed transaction--we expect PMI's S&P Global Ratings-adjusted debt to EBITDA (pro forma) in 2022 to be about 3.0x, up from 1.9x in 2021. For subsequent years, we then expect a gradual deleveraging trend, with adjusted leverage remaining in the 2.5x-3.0x range. The deleveraging trend is supported by recurring and healthy annual free operating cash flow (FOCF) reported in the range of $9.0 billion–$9.5 billion (after capital expenditure and working capital requirements), although most of this will be used for dividend payments, with an estimated annual cash-out of about $8.0 billion, growing progressively each year. Positively, the company announced the suspension of its share buyback program which began in July 2021." - S&P (emphasis added)

Moody's is reviewing PM for a downgrade to A- as well.

The review for downgrade will focus on the impact of the take-over on PMI's capital structure and financial policies and will assess the ultimate structure and funding mix of the acquisition financing and the potential increase in leverage. From preliminary analysis, based on the current proposal, any potential rating downgrade is likely to be limited to one notch. Moody's expects to complete the review upon completion of the transaction." - Moody's

For now, Fitch maintains its A stable credit rating.

Why is PM buying Swedish Match?

Swedish Match is a Stockholm-based market leader in nicotine pouches, moist snuff, U.S. chewing tobacco, and cigars, and it has a smaller business in lighters. In Scandinavia (defined as Norway, Sweden, and Denmark) the company commands half of the market for smokeless tobacco and nicotine products, a market dominated by snus. In the U.S., the firm is the leader in nicotine pouches with a 64% share, according to the company's own estimates, and it owns ZYN, the leading U.S. brand. However, On, a competitive brand owned by Altria, has taken some share in recent quarters. Swedish Match also owns the leading U.S. chewing tobacco brand America's Best Chew and commands a 40% share. The company is a distant third player in moist snuff, a category dominated by Altria, with a 9% share through its Longhorn brand.

Like Altria's smokeless segment, Swedish Match is a highly profitable business with a superior profile relative to cigarettes. It generated a nearly 45% operating margin in 2021 and has expanded profitability every year since 2016. Revenue has grown by double digits since 2018, driven by footprint expansion in the U.S., its smoke-free business, and strong pricing power. Our back-of-the-envelope estimate suggests the company generates roughly 100% return on invested capital, above even its larger peers in the tobacco industry." - Morningstar

It's a rapidly growing and highly profitable business and one that can help PM diversify its smoke-free future plans away from just IQOS.

PM's IQOS remains the #1 smoking cessation tool in history, with 71% of users trying it and permanently quitting smoking.

Thanks to lockdowns easing, easy comps, and the strength of IQOS, PM was able to deliver 2.2% volume growth last year, the first time since the spin-off that volumes have gone up.

The good news is that the world is a lot bigger than Russia and Ukraine, and PM has tapped just 4% of the global addressable market.

PM's 4.7% yield remains very safe, though the dividend is now expected to grow a lot slower than before the Russian invasion.

Before Russia invaded Ukraine PM was the growth king of tobacco with analysts expecting 12.7% long-term growth at one point.

Combined with a very safe 5% yield that meant potentially 16% to 17% long-term total returns.

But remember that 23% of IQOS sales are in Ukraine and Russia (about 15% Russia). So what does the growth outlook for both companies look like now?

Why are analysts so much more bullish on MO than PM?

Because MO's long-term future is also based on a smoke-free future.

In heated tobacco, our teams are continuing to work with PMI on IQOS re-entry plans, and we will keep you informed on developments as circumstances warrant. There is no change to our expectations regarding IQOS product availability." - MO CEO, Q1 conference call

Is this a risk-free investment? Absolutely not, there is no such thing as a risk free stock.

Some analysts believe that PM buying Swedish Match might prevent MO from marketing IQOS in the US.

However, that's not the consensus, for one simple reason.

This means the US remains a massive untapped market for IQOS and analysts believe that PM's agreement with MO has PM obtaining the majority of IQOS revenue.

Rather than go to war with MO and try to market IQOS around its back, which MO would likely sue over, most analysts believe PM and MO will still eventually launch IQOS in the US.

So what does this fundamentally mean for high-yield investors trying to decline between MO and PM today?

It means that Altria is expected to outperform the S&P 500 and aristocrats in the future, just as it has for over 90 years.

What kind of difference does an extra 3.3% per year in returns mean?

Over many years and decades, it could amount to a small additional fortune for MO investors.

In fact, it could potentially mean that MO outperforms PM by over 3X in the coming decades.

But you don't necessarily need to wait for decades to enjoy far stronger returns with MO than PM.

If PM grows as analysts expect by 2024 it could deliver 22% total returns, or 8% annually.

MO, in contrast, is 21% historically undervalued and is now expected to grow almost twice as fast as PM over time.

There is a lot more to deciding on what company to entrust with your hard-earned money than just valuation and growth potential.

PM has a lot going for it.

BUT MO simply has PM beat in so many ways that matter.

I have no plans to sell my PM shares, just because its return potential is now under my 8% minimum for defensive blue-chips.

However for new money today I think the case is strong (as Goldman has pointed out) that Altria is the superior long-term high-yield dividend growth investment.

In this bear market, there are blue-chip bargains raining from the sky. And even Warren Buffett has limited dry powder to put to work.

If you're looking for a safe haven in today's market terror, consider Altria, and its nearly 7% very safe yield and low volatility, recession-resistant business model.

As part of a diversified and prudently risk-managed portfolio, the best performing stock in history has what it takes to let you sleep well at night and retire in safety and splendor. 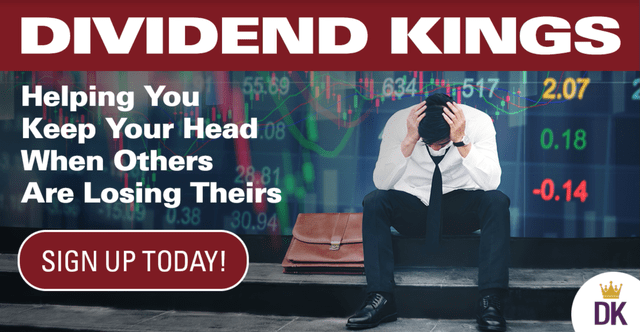 Disclosure: I/we have a beneficial long position in the shares of PM, MO either through stock ownership, options, or other derivatives. I wrote this article myself, and it expresses my own opinions. I am not receiving compensation for it (other than from Seeking Alpha). I have no business relationship with any company whose stock is mentioned in this article.

Additional disclosure: Dividend Kings owns both PM and MO in our portfolios.