As noted in last week’s XLU Weekly, the highest probability path for this week was for price discovery lower, barring failure of 64.75s as resistance. This week’s primary expectation did not play out as a sell-side breakdown attempt early week to 63.55s failed. Buy excess formed there, halting the sell-side sequence, driving price higher to 64.63s ahead of Friday’s close, settling at 64.40s.

This week’s auction did not see the primary expectation play out as a failed breakdown resulted in price discovery higher to test key supply overhead, 64.75s-65s. Within the larger context, this week’s auction saw continued balance development near major supply, 64.50s-65s.

Looking ahead, the focus into next week centers upon response to the key supply cluster, 64.50s-65s. Sell-side failure at this key cluster would target key supply cluster above new all-time highs, respectively. Alternatively, buy-side failure within this key cluster would target key demand clusters below, 63.20s-62.65s/61.80s-61.30s, respectively. From a structural perspective, the highest probability path near-term is sell-side, barring failure of 64.75s as resistance. Within this near-term context, the intermediate term (3-6 month) bias is now neutral between 64.94s and 61.31s and at a key juncture and depends on resolution around 64s.

It is worth noting that breadth based on the S&P Utility Sector Bullish Percent Index has seen the beginning of a downtrend from all-time highs formed in August-September 2019. Stocks more broadly, as viewed via the NYSE, have seen recent rising bullish breadth. Asymmetric opportunity develops when the market exhibits extreme bullish or bearish breadth with structural confirmation. Intermediate term structure shifts neutral as utility breadth declines amidst broader market bullish breadth. This divergence may mute what is potentially sector rotation out of utilities. 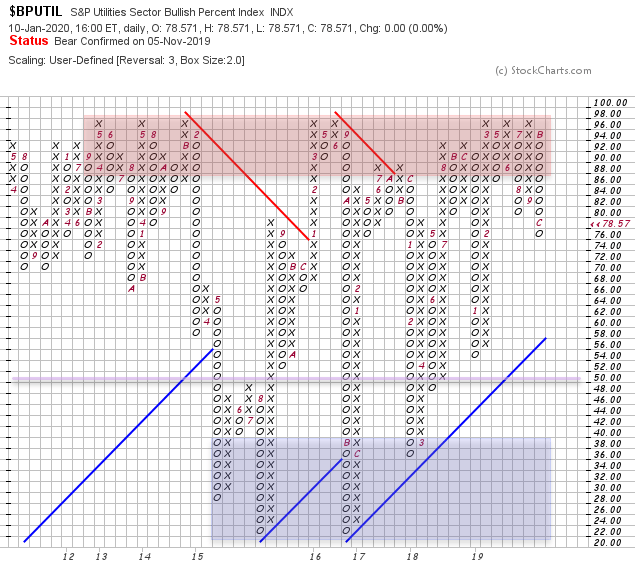 The market structure, order flow, and breadth posture will provide the empirical evidence needed to observe where asymmetric opportunity resides.